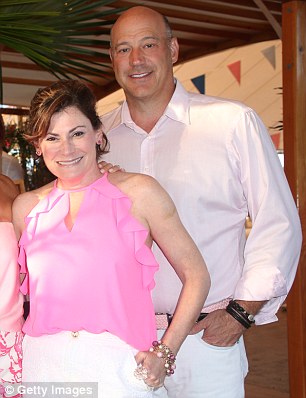 Former Goldman Sachs president Gary Cohn admits he’s spent most of his time playing golf since quitting as President Trump’s economic adviser in March. Is he starting to get under his wife Lisa’s feet? At a Hamptons fundraiser last weekend, Mrs C auctioned two custom-designed paddleboards, informing the winning bidder: ‘If you need a large man to carry it down to the dock for you, my husband is unemployed and looking for work.’

Walrus-chopped Alisher Usmanov’s departure from Arsenal Football Club prompts chatter that he might relocate his billions to Everton, where his former business associate Farhad Moshiri owns a 49.9per cent stake. It raises the prospect of Usmanov’s gargantuan yacht Dilbar trundling up the Mersey whenever the Uzbek-born mining tycoon, 64, is in town. The 110million gin palace, the world’s biggest yacht, boasts a 25million pool, two helipads and a crew of 100. It’s also fitted with the most advanced security system in the world.

Gregarious Aberdeen Standard boss Martin Gilbert, who moonlights as deputy chairman of Sky, declined to speculate on Radio 4 yesterday whether Fox would submit another bid for the broadcaster. He chuckled: ‘If I knew that I wouldn’t be sitting here, I’d be sunning myself in some tropical resort.’ Poor wee Martin, 63, currently squeaks by on a £4.3million-a-year pittance.

Re Aberdeen, Gilbert’s joint chief executive, Keith Skeoch, 61, insists that their unusual power-sharing arrangement is going swimmingly, praising his colleague’s humour and intelligence, adding: ‘He’s also taught me how to use Whatsapp.’

Domino’s Pizza doesn’t look a happy ship does it? Shares plunged nearly 10per cent yesterday amidst falling profits which the firm puts down to the heatwave, uncertain market conditions and, for all we know, Mercury being in retrograde. Meanwhile, there’s loose talk toothy boss David Wild has been rubbing franchisees up the wrong way, though he insisted yesterday all was tickety-boo. ‘We have a strong and stable leadership,’ said Wild, despite being in the hunt for his fourth financial officer in three years.