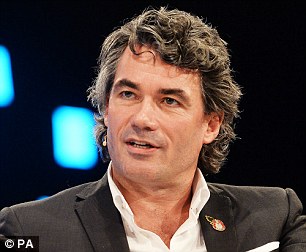 A YouTube video has emerged showing him dressed in sunglasses and a panama hat at the recent Isle of Wight music festival, dancing languidly on stage with groovy New York funk artist Nile Rodgers.

Actually I could quite see hunky Gav, 50, twerking away in a sequinned shirt on Strictly…

I don’t recall ever seeing him so casually attired. Wonder if Tim’s racy girlfriend, Polish undercrackers model Patrycja Pyka, 29, has taken control of his wardrobe?

Morgan Stanley has promoted its talented head of equity trading Ted Pick to oversee its entire investment and trading divisions, leading some to assume he’s being lined up as current chief James Gorman’s successor.

Unlike Aussie Gorman, 59, who’s not one of life’s sparklers, gingernut Pick, 49, is a lively character. Previous boss John Mack once had to have a quiet word about the profanity-laden emails he was prone to sending colleagues.

Here’s a first. The Treasury Select Committee is going on the road.

Next week, Bank of England governor Mark Carney, his dusty deputy Sir Jon Cunliffe, 65, and Financial Conduct Authority boss Andrew Bailey, 59, will be grilled at the Farnborough Airshow, where one of the highlights this year is an F-16 fighter jet.

For organisers’ sake we must hope well-nourished Bailey doesn’t insist on squeezing in the cockpit.

Firebrand President Cristina Fernandez said a few unsavoury comments about the firm in public, and I suspect a few more unsavoury things in private too.