CITY DIARY: Is Wall Street paying its head honchos too much? 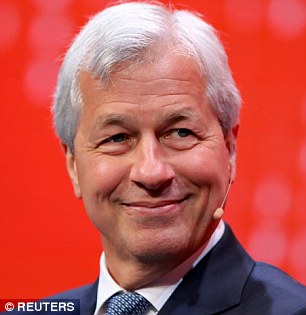 Toothy Citigroup boss Michael Corbat’s £14million pay packet is, according to recent filings, 369 times what the median employee at his bank earns.

Meanwhile, controversial Tim Sloan’s £12.3million payday is 291 times the median at Wells Fargo. Whisper it, but might Wall Street pay its head honchos too much?

Construction firm Costain’s towering, £1million-a-year chief Andrew Wyllie tells me he’s formed a book club with a few like-minded friends to while away their spare time.

Lately, the group has been discussing Tim Marshall’s Prisoners of Geography, a study of how geography impacts international affairs.

More edifying than the local golf club, I suppose.

Following Reckitt Benckiser’s aborted swoop on US drug firm Pfizer, might it be time for brilliantine-haired chief Rakesh Kapoor to finally shuffle off the stage?

With shares down 11.2 per cent in the past two years, his extraordinary £14.6million pay packet – slashed by a third from £25million – remains a stupefying mystery.

Like that other great mystery the Loch Ness monster, Indian-born Rakesh, 59, is seldom ever seen.

The patronisingly titled People’s Postcode Lottery, founded by tousled Dutch entrepreneur Boudewijn Poelmann, 69, justifies its existence by boasting it gives 32 per cent of each ticket to charity.

But does it test customers’ patience with those dreadful ‘Someone’s knockin’ at the door’ adverts, which run incessantly on prime-time television?

They give ceaseless bookmakers’ adverts, which interrupt every sporting event, a run for their money in the irritating stakes.

The latest self-important craze around the Square Mile, I’m told, is for bankers to include on their business card something called a PGP encryption keycode.

It’s a readily available software which allows users to exchange messages securely, without fear of being hacked.

If you were wondering, PGP stands for ‘pretty good privacy’. In this case, ‘pretentious grandiose prat’ might be more apposite.