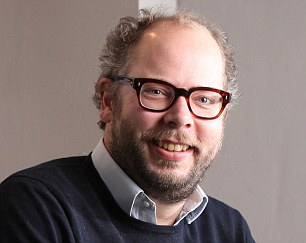 Cheery publican Charlie McVeigh is planning for life as a devoted political spouse after flogging his Draft House chain of watering holes to Brewdog for £15million.

Sophia, the wife of the whiskery Old Etonian, has been elected as a Tory councillor for Kensington. McBoozer, 50, announces: ‘I’m modelling myself on Denis Thatcher.’

The distinguished Wincott Foundation awards, which recognise ‘outstanding achievement in the field of economic, business and financial journalism for television’, didn’t present its usual award for best television journalist during this week’s ceremony at Mansion House.

Why so? Because none were this year deemed worthy of a gong. A flying kick in the crutch to our puffed-up broadcasters, no doubt about it.

IAG chief executive Willie Walsh, 56, is quoted on fancydrawers Chelsea trattoria Ziani’s website championing their Coda di Rospo alla Graticola – charcoal-grilled monkfish to you and I – as ‘the best I’ve ever tasted’.

Well, well. Wee Willie’s certainly come a long way since he was flying rickety Aer Lingus 737s out of Donegal airport, hasn’t he?

Charismatic Vodafone chief Vittorio Colao’s newly announced replacement, £3.4million-a-year chief financial officer Nick Read, might look like your average bean-counter, but he does at least have a compelling back story.

The son of a humble market stall trader, Read, 53, grew up under the Heathrow flight path in listless Feltham.

He attended the local comprehensive, long since demolished, where he was one of only two pupils in his year to sit A-levels.

News that those rug-chested property twins the Tchenguiz brothers – Robert and Vincent – are on non-speakers due to a row over their family trust is nothing new.

Germans Adi and Rudi Dassler, respective founders of sportwear giants Adidas and Puma, fell out during a 1943 bombing over Bavaria. Clambering into the air raid shelter, Adi remarked: ‘There come those pig dogs again.’

He meant our RAF boys, but Rudi thought he was referring to him. Result: the two brothers never spoke again. TV’s Edmund Blackadder once observed: ‘The Germans are such a cruel race.’