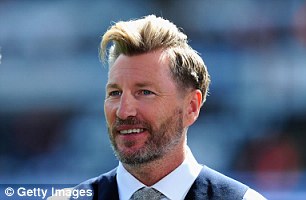 He and a host of other ex-Premiership footballers are suing the bank over a controversial Spanish property deal gone sour.

Coutts, which insists it has no case to answer, provided the investment.

As Henry Kissinger remarked of the Iran/Iraq war: ‘It’s a pity both sides can’t lose.’

So was now really the best week for chairman Paul Achleitner, 61, to go on holiday?

As Conviviality teeters on life support, my attention is drawn to an interview given last year by the firm’s hare-in-the-headlights boss Diana Hunter, who stood down last week in the wake of an unpaid £30million tax bill.

She revealed she spent most of her time in her ‘mobile office’, a sporty Porsche Cayenne with a printer on the rear seat, which she breezily explained came in handy for ‘printing takeover agreements on the go’.

La Truss, 42, means to say you can’t put the spending cart in front of the growth horse, of course, silly moo.

One user comments: ‘No way I’m taking a carriage ride with you. Or trusting you to find your own elbow.’

Mullet-haired JD Wetherspoon boss Tim Martin, 62, has for the past year been a reasoned and articulate voice for Brexit.

But I worry that his claim on Radio 4 yesterday to be ‘chairman of the world’s grooviest pub company’ puts him in severe breach of the Trade Descriptions Act.