CITY DIARY: Santander’s executive chairman Ana Botin is the one who wears ‘los pantalones’ at home

CITY DIARY: Santander’s executive chairman Ana Botin is the one who wears ‘los pantalones’ at home

Santander’s executive chairman Ana Botin says she now considers herself a feminist, something she wouldn’t have ten years ago. Stylish mother-of-three Ana, 57, is particularly vexed by inequality at home.

She says: ‘In Spain, women devoted many more hours per week more to housework (13 hours more) and caring for the children (25 hours more) than men did.’

Any such imbalance at Casa Botin? Says a banking source: ‘No way. Her husband Guillermo is a wealthy landowner but Senora Ana definitely wears los pantalones.’ 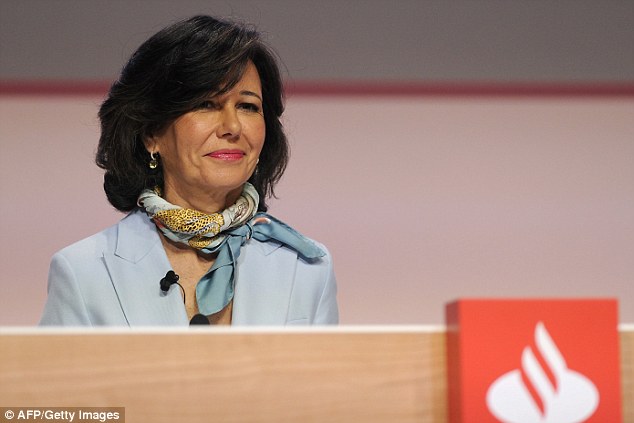 Further to my story yesterday about Newcastle United fans finding ways to hit the club’s reviled owner Mike Ashley in the pocket, my attention is drawn to a new website called Sportsredirect.com. The site, set up by five mischievous Geordies, enables customers to browse the same big name clothing brands available at Ashley’s firm Sports Direct but redirects their choices over to a rival retailer’s website. Ingenious!

London-based hedge fund Brevan Howard has reduced its space inside its futuristic-looking office block on Baker Street, previously Mark and Spencer’s HQ, meaning the staff kitchen and gym have been ditched. Is last year’s annus horribilis, when the fund posted its worst-ever results, starting to bite? The fund’s founder, Alan Howard, 54, is hardly renowned for penny pinching. He once splashed out £25,000 for dainty pop siren Pixie Lott to serenade guests at his son’s bar mitzvah.

Fraudulent stockbroker Jordan Belfort, the notorious ‘Wolf of Wall Street’ whose memoirs were the subject of a puerile Leonardo DiCaprio film, is back in court. Creditors want royalties from his latest book, Way of the Wolf, which provides details of how he cheated investors out of £155m. Belfort, 56, who still owes his victims £72m, earns most of his money delivering £70,000-a-pop ‘motivational’ speeches. Dumb audiences unfailingly grant him a hero’s welcome.

Re Mike Ashley, journalists bombarded his guileless PR capo Keith Bishop’s phone last week, hoping for the lowdown on the House of Fraser takeover. Imagine their surprise to discover that, despite the upheaval at Ashley Towers, debonair Keith was sunning himself on the Algarve.