CITY DIARY: Starbucks mogul Howard Schultz is urged not to run for U.S. president because it will alienate customers

Associates of jargon-prone Starbucks mogul Howard Schultz are urging him not to run for US president, warning it will alienate the coffee chain’s customer base.

Schultz, 64, was recently introduced by former Republican candidate Mitt Romney to a group of potential donors, who were reportedly left unimpressed.

Will voters risk putting another oddball billionaire in the White House? 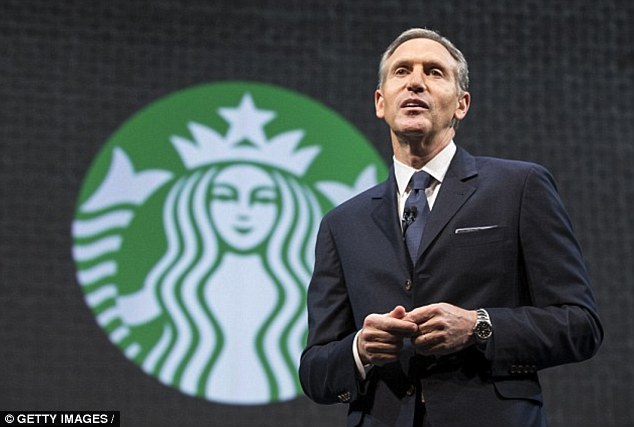 Associates of jargon-prone Starbucks mogul Howard Schultz are urging him not to run for US president, warning it will alienate the coffee chain’s customer base

Who will Goldman Sachs’s newly announced chief David Solomon appoint as his deputy? London boss Richard Gnodde’s name I have already mentioned. Another contender is the bank’s tattooed chief financial officer Marty Chavez, 54, a cheery fellow with an interesting line in body art. ‘Marty’ returned to Goldman in 2005 supposedly on instructions from God, whom he says visited him while he was on a silent retreat at a New Mexico monastery. Reformed tippler Senor Chavez has been 20 years sober.

Airbus’s UK chief Tom Williams recently delivered a fire-and-brimstone warning to Theresa May that a ‘no deal’ scenario threatens his firm’s future in the UK. The balding Glaswegian, 66, can make such breezy threats safe in the knowledge he won’t have to carry them out. Williams let it be known around the Farnborough Airshow that he intends to retire by Christmas.

Sexting Business Minister Andrew Griffiths, 47, ex of Halifax, appears intent on clinging on an as an MP despite calls from his Burton constituents to stand down. Tory chiefs must be desperate to be rid of him before the #MeToo lobby get going. Perhaps that’s why Philip Hammond has been spotted entering Downing Street clutching the phone number of deposed Tory MP Charlotte Leslie, 39. She’s well known to be hankering for a safe seat.

Bank of England governor Mark Carney appeared in front of the Treasury Select Committee yesterday from the Farnborough Airshow, meaning anyone not at the show had to view it on an internet feed. Early on, Carney, 53, stressed the need for technological resilience, a reference to the recent IT meltdown at TSB. It was at this point the web broadcast conked out.