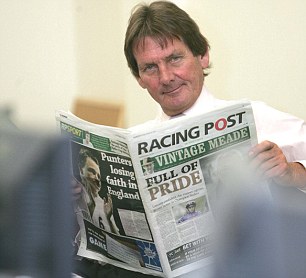 Bramley-cheeked stockbroker Andy Stewart is kicking himself after a £10,000 bet on his horse, Saphir Du Rheu, to win last week’s Cheltenham Gold Cup failed to come off.

Stewart, 66, worth £80million, hoped to donate the £1million winnings to his charitable foundation.

He shrugs: ‘As I have a stake in the bookmaker, Paddy Power Betfair, my loss will go to the shareholders, so all’s not all lost.’

A beard has appeared across the milky chops of ex-Treasury mandarin Sir Nicholas Macpherson, who we must hope is not having some sort of late life crisis.

Love to know how it’s gone down in the oak-panelled corridors of C Hoare & Co, Britain’s oldest bank, of which Macpherson is chairman, and is so refined liveried doorman greet visitors at the entrance.

Facebook’s Mark Zuckerberg is hardly going to agree to MPs’ demands that he answer their questions on the Cambridge Analytica scandal.

He had a seven-minute pow-wow with Newsnight’s Emily Maitlis in 2011, but proved immune to her flirty charms and behaved like an automaton.

Speaking of Newsnight, I loved Senator John Kennedy’s remark to Evan Davis this week that Zuckerberg and Facebook’s behaviour ‘is getting into the foothills of creepy’.

Hermes credits its record £4.8billion jump in sales to the popularity of Birkin bags, the vastly expensive must-have item named in honour of chanteuse Jane Birkin.

The jolie laide siren, 71, helped design it while on a flight with Hermes’ then chief, Jean-Louis Dumas, in the early 80s.

She scribbled the bag’s famous silhouette on the back of an Air France sickbag.

The US Federal Reserve’s cadaverous new chairman Jerome Powell, 65, has reportedly dazzled staff with his impressive ability to repeat something they’ve told him backwards.

Might multi-millionaire Powell’s talents be wasted crunching numbers at the Fed?