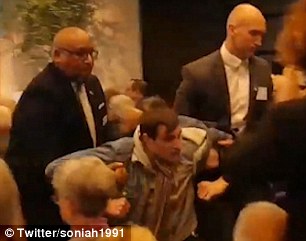 Storming into Westminster’s hideous QEII Centre, they chanted: ‘Hey-hey, ho-ho, climate change has got to go.’

Were we too hasty in ditching Boris Johnson’s £300,000 water cannons? Perhaps Barclays could be arm-twisted into sponsoring new ones.

Neighbours in Dorset say he drives around in three different Range Rovers, telling anyone who’ll listen he now consults for a cosmetics brand called CID.

Says a local mole: ‘I saw him buying lunch recently in the Langton Arms near Blandford. His credit card was declined, naturally.’

Forget Sainsbury’s and Asda rebranding after their proposed £15billion merger as Asburys or Sainsda.

The Sainsbury clan, who retain a 6 per cent holding in the supermarket, would never entertain such an idea.

They’re an eye-rollingly haughty bunch. When Arcadia tycoon Sir Philip Green once made enquiries about taking over the grocer, the family consigliere pompously informed him: ‘Remember the name over the door.’

His head scratching suggestion that our musical choices offer insight into consumer confidence is a case in point.

Horrid. On a happier note, the table tennis-mad ‘Norf’ Londoner has also shed his heaving avoirdupois. So less of the ‘Fat Mike’ jibes please, people.