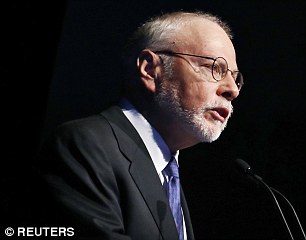 The hedge fund Elliot Management, run by unyielding New Yorker Paul Singer, is fed up with being branded ‘secretive’.

Its monthly investor letter reads: ‘This bothersome word is usually appended, like some chrome automobile hood ornament, to the words ‘hedge fund’.

It is rarely appended to government, tech company, central bank, president or board of directors.’

Incidentally, the letter is stamped ‘confidential and proprietary’.

Not-at-all secretive Singer, 73, has previously threatened legal action against investors who share his missives with outsiders.

Barclays’ customer service Twitter feed was busy taking the usual enquiries on Sunday when up popped the BBC’s donnish Money Box presenter Paul Lewis, 74, who asked: ‘Why did Barclays immediately announce a rise in mortgage rates after Thursday’s Bank Rate rise but no news on increasing the derisory rates the bank pays to customers who are savers?’ Barclays’ hitherto helpful operators suddenly went eerily mute.

Hippy-drippy office space company WeWork boasts of giving free coffee to tenants. But a ‘member’ of one of its London locations tells me: ‘The queue is always at least half a dozen deep and the barista swamped.

More often than not it’s easier to just go to Starbucks.’ Wispy entrepreneur Luke Johnson, 56, skewered the £15billion firm in his Sunday Times column, writing: ‘It is unfortunate that WeWork is not quoted, because I would surely short the shares.’

Chinese taste buds have clearly developed since the turn of the century.

In 1997, a New York Times reporter stumbled upon a bar in Shanghai which served goblets of £500-a-bottle Chateau Lafite-Rothschild Grand Cru mixed with Sprite and garnished (quelle horreur!) with a wedge of watermelon.

The wealth bible Forbes names Dumfries-born Calvin Harris as the world’s highest-earning DJ over the past 12 months, pocketing £37million.