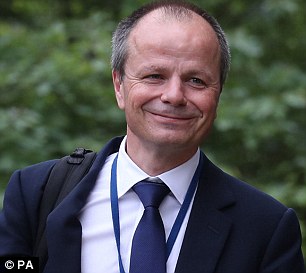 News that Royal Bank of Scotland’s highly-rated finance chief Ewen Stevenson has quit after just four years ‘to take up an opportunity elsewhere’ was the source of much intrigue at the bank’s annual meeting yesterday.

Bankers at UBS have hired the former European Commissioner Lord Hill to advise them on Brexit. With other advisory roles at Aviva and Deloitte, faceless, dyed-in-the-wool Eurocrat Hill, 57, hasn’t done too badly out of his old job.

Especially if you consider that, upon arriving in Brussels in 2014, the thirsty EU president Jean-Claude Juncker had to Google him to find out who he was.

Advertising mogul Sir Martin Sorrell’s boardroom at his new venture S4 Capital reads like the City’s version of the TV show Last of the Summer Wine.

Nor is Sorrell, 73, whose diminutive frame and love of attention call to mind the sitcom’s loveable character, Compo. But there all comparisons between Sir Martin and the skirt-chasing ragamuffin cease.

Korean Air chairman Cho Yang-ho’s wife Lee Myung-hee, 69, has been grilled by police for 15 hours over allegations she habitually walloped her chauffeur, security guards and housekeepers.

Ill temperament clearly runs in the Cho family. Eldest daughter Cho Hyun-ah, 43, was once arrested for air rage after a flight attendant served her macadamia nuts in a bag instead of a porcelain bowl.

Another daughter, Cho Hyun-min, 34, is under investigation for allegedly hurling a cup of water at someone during a business meeting. Don’t these monstrous harpies make phone-flinging supermodel Naomi Campbell seem almost demure?

There’s debate over what to label Italy’s possible departure from the European Union. Quitaly? Exitalia? Italeave? I think Arrivedexit has a nice ring to it.