CITY DIARY: Why TSB boss Paul Pester is no dimwit 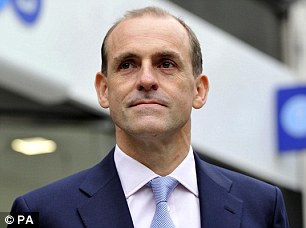 Twitter target: But TSB boss Paul Pester has a doctorate in mathematical physics

TSB boss Paul Pester resembles a kite in a hurricane when dealing with his bank’s IT meltdown.

But contrary to the imaginative insults being flung at him on Twitter, Pester is no dimwit.

He has a doctorate in mathematical physics, of which he’s particularly proud. Former colleagues at Lloyds say his regular missives to staff were unfailingly signed ‘Dr Paul Pester’.

City tycoon Michael Spencer is sitting pretty after the £3.9billionn sale of his fintech group Nex to the Chicago Mercantile Exchange (CME).

The urbane former Tory treasurer, 62, has bagged £670million from the merger, a seat on the CME board plus a fancy ambassadorial role which will see him jet-setting around Europe and the Middle East.

Any other reasons to uncork the Petrus? Well, he’s particularly chuffed that his horse Free Wheeler romped home in last Sunday’s Kenya Derby.

Sky News doesn’t shy away from reporting on the bidding war for its parent company, Sky, even though, awkwardly, it threatens the channel’s existence. Au contraire.

Desperate Dan-like presenter Ian King’s report on Comcast countering 21st Century Fox’s offer with a £22billion bid was given top billing and had an even-handedness the BBC would do well to observe.

Doubtless swashbuckling ex-Cazenove bigwig Sir Michael, who was also Margaret Thatcher’s principal adviser on privatisation, would have approved of his son’s robust approach.

A former master of the Crawley and Horsham hunt, he’s said to have kept a meticulous dossier on all the local antis.

Despite criticising the president for his unfashionable views on immigration and transgender people, Cook, 57, was ushered into a private pow-wow at the White House yesterday.