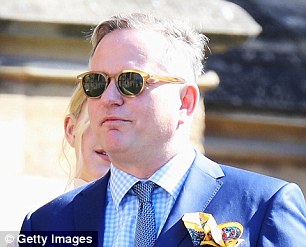 Why was urbane Soho House founder Nick Jones, 54, at the royal wedding? Since Prince Harry and Meghan Markle’s first date was at one of Jones’s private clubs, perhaps the Prince felt he owed him.

Interesting, too, that Jones’s wife Kirsty Young, 49, preferred to front the BBC’s coverage rather than join her hubby in the congregation.

Re the royal wedding, US networks certainly splashed the cash on covering the event, not least NBC which took over the whole of the Macdonald Windsor Hotel. Well worth it, though.

Media analyst Richard Broughton of Ampere Analysis estimates a 30-second advertising slot during the event would have fetched nearly £1million.

D-Day for Deutsche Bank chairman Paul Achleitner on Thursday, with some shareholders hoping to oust him at the AGM.

Many of them feel he should have carried the can for the bank’s woes rather than recently ousted chief, likeable Yorkshire-born John Cryan.

They’ll also be unimpressed to learn that when news broke of Cryan’s impending dismissal, bearded Achleitner, 61, was enjoying a cruise down the Amazon.

Dome headed Palombo, 39, who denies wrongdoing, insists his vice-president title while at the bank was misleading, comparing his role to ‘the guy who serves you at McDonald’s’.

Prosecuting QC James Waddington’s response: ‘You weren’t paid £400,000 for being a tea boy, were you?’

Tickets are an equally stimulating £995 plus VAT, if you can bear it.