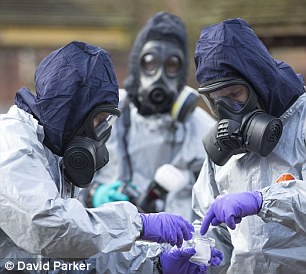 City investors backed a £3billion fundraising by the Russian state just days after it was accused of poisoning a former spy in Salisbury.

Big institutional investors are said to have ploughed about £1.3billion into the Eurobond sovereign debt deal, which was organised in London in March by Moscow’s VTB Bank.

The bank, majority owned by the Russian state, is under US sanctions but a legal loophole means this does not cover any bonds it handles.

MPs on the Foreign Affairs Select Committee highlighted the bond sales in a report as evidence of cosy links between the City and Russian leader Vladimir Putin’s regime.

The oversubscribed fundraising came two days after Britain expelled 23 Russian diplomats in retaliation for the nerve agent attack on Sergei Skripal and his daughter Yulia.

It prompted a mocking tweet from the Russian embassy, which said it was clearly ‘business as usual’.