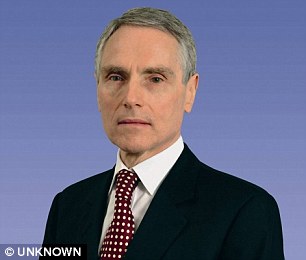 Corporate raider Edward Bramson is demanding a say over the new chairman of Barclays as his assault on the lender continues.

The softly-spoken New Yorker is using his 5.2per cent stake in the bank to try to force it to change tack, amid rumours he would like the prized trading business to be broken up and sold off.

Barclays chairman John McFarlane, 71, is expected to retire next year and 67-year-old Bramson wants to help pick a replacement.

His company, Sherborne Investors, said in a stock market update that it is engaging with Barclays over how it spends its money, what its costs are and the search for a new chairman.

Sherborne said: ‘The investment manager’s present intention is to continue its dialogue with Barclays for as long as it appears to be appropriate to do so.’

McFarlane is thought likely to go at next year’s annual meeting, and Barclays’ senior independent director Crawford Gillies has begun the search for a replacement.

Bramson’s normal method is to demand he gets a personal seat on the board of companies which he targets, but he has so far stopped short of doing this at Barclays.

The bank’s chief executive, Jes Staley, is expected to sit down with Bramson in the next few weeks as part of a series of meetings with investors after reporting half-year results last week.

Barclays unveiled half-year profits of £1.6billion, down 30per cent on a year earlier.

The fall was caused by £2billion of one-off costs – including a £1.4billion payout to US investigators for selling toxic mortgages before the financial crisis, and £400million for repaying victims of payment protection insurance mis-selling. Barclays declined to comment.