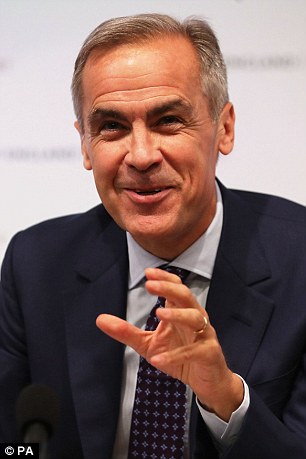 No laughing matter: A no-deal Brexit should not be taken lightly, said Mark Carney and the Bank of England has stressed tested interest rates shooting up not falling in that scenario

The interest rate rise last week was no surprise.

Unlike previously hotly-tipped rate rises that came to nothing, the Bank of England did nothing to dispel expectations in the run-up to the decision.

That banks have hiked mortgage rates by more than savings rates shouldn’t come as a shocker either.

We long ago learnt that the explicit and implicit public support that kept banks and building societies intact through the financial crisis will never be properly repaid.

But amid the excitement of reaching the heady heights of a 0.75 per cent base rate, there were a few interesting elements that got somewhat buried.

The Inflation Report brought two of them:

The Bank might have raised rates now but it expects them to rise slower in the future than previously thought.

Furthermore, the Bank has enough confidence in the financial system that it is willing to start unwinding quantitative easing and selling its UK government bonds when rates reach 1.5 per cent, rather than the previously planned 2 per cent.

So far, so good. But the next day Governor Mark Carney delivered his sucker punch.

The risk of a no-deal Brexit is ‘uncomfortably high’ and in that situation all bets may be off.

Crucially, however, on rates those bets might be off in the opposite direction to most expectations. He warned that the Bank of England had been stress testing banks for a huge hike in that scenario.

The consensus on what will happen to interest rates over the next three years can be broadly summed up as, either they rise gently but are then are cut again when a recession hits, or we get a no-deal Brexit and an emergency cut back down to 0.5 per cent or lower, where they will stay for some time.

Despite being included in one of the original so-called ‘Project Fear’ warnings, rates shooting up because of Brexit is not on many people’s minds.

So could a scenario really occur where a chaotic no-deal exit from the EU leads to the Bank of England hiking rates as high as 4 per cent?

Perhaps we’ve got a weird monetary policy Stockholm syndrome, captivated by low rates to the extent that we can’t even see base rate moving up in an emergency

Such a move would arrive to defend the currency, as investors shunned UK bonds and sold out of British investments, while speculators bet heavily against the pound.

Yet, it would also probably scupper the domestic economy. A sizeable chunk of homeowners would no longer be able to afford their mortgages, our personal debt mountain would pose a major risk, and businesses would struggle with their loans.

That’s a credit crunch and the last one didn’t turn out too well.

But is 4 per cent rates so beyond the realms of possibility?

Perhaps we’ve got a weird monetary policy Stockholm syndrome, becoming captivated by low rates to the extent that we can’t even see base rate moving up in an emergency – even to what would still be a historically low level.

It’s certainly intriguing that the Bank of England governor felt compelled to mention it. 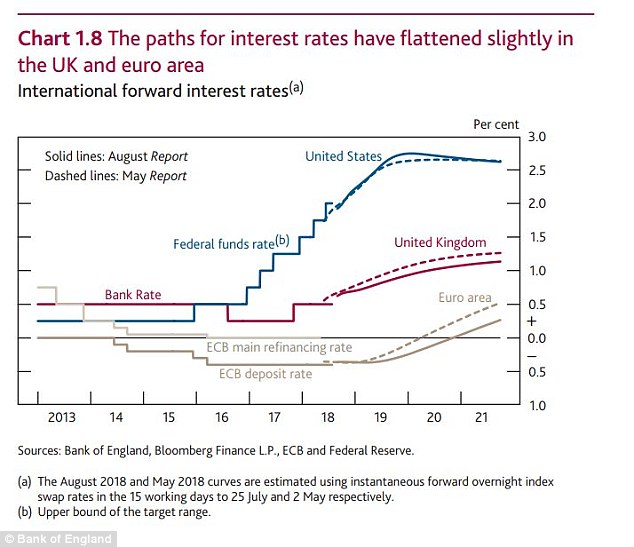 Was the rate rise a wise move?

Some have been calling for a rate rise for a long time, while others believe we must try to get back towards normal before recession hits.

But those opposed believe even this tiny shift up to a very low base rate level of 0.75 per cent, is a gamble too far from the Bank of England.

On this podcast, Simon Lambert, Lee Boyce and Georgie Frost dive into the rate rise.

Why did the bank hike rates, who will it affect, why do interest rates even move up and down, and how did they end up at 0.5 per cent in the first place?

More crucially, how high will they go now and how fast?