Len and Val Fitzgerald had planned to spend a peaceful old age in their little terrace house in Eastbourne on the Sussex coast.

The Fitzgeralds, both 76, have invested many hours redecorating and improving their two-bedroom property to turn it into a quiet retirement haven for themselves and their beloved dog, Millie.

But now the couple, who have never missed a mortgage payment, are being taken to court for an eviction hearing by their bank, Santander.

If the judge sides with Santander, the Fitzgeralds face being turfed out of the home where they have lived for 15 years. 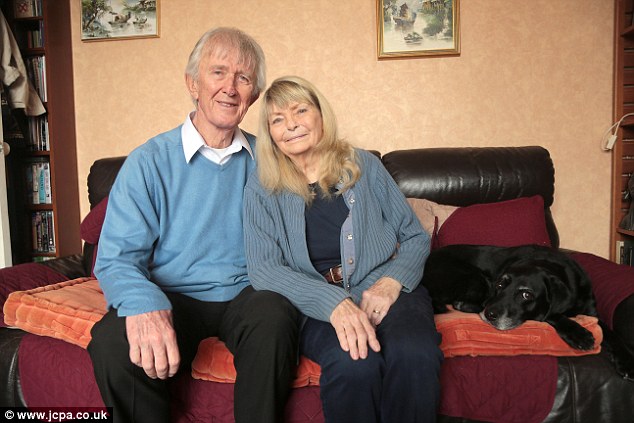 Bleak future: Len and Val Fitzgerald, with pet dog Millie, may be evicted by Santander

And in all likelihood, they will have to leave Eastbourne and give Millie to an animal shelter.

The Fitzgeralds are among the worst- hit victims of Britain’s interest-only mortgage crisis.

About 1.67 million people have one of these deals, with tens of thousands due to mature in the next few years.

Like other customers sold this type of home loan in the Nineties and 2000s, the Fitzgeralds haven’t had to repay a penny of the capital until now. Instead, they only paid the interest each month.

But large numbers of borrowers are predicted to reach the end of their loan term and face demands for cash they haven’t got.

This is usually because lenders failed to check how they would repay the debt — or because the investments the borrower made have failed to grow quickly enough.

Most lenders offer struggling borrowers some leeway, such as a few extra years to pay up.

But only until a certain age.

The Fitzgeralds were refused an extension when their loan matured in December 2015 because it would have left them in debt after the age of 75 — Santander’s age limit for mortgage lending.

For three years, the couple tried to negotiate with the bank, arguing that they were still able to pay the £770-a-month mortgage bill from their £1,300 joint income and £200 of mortgage interest support from the Government.

But the bank finally reached the end of its patience in January. It began legal proceedings to repossess the property and told the couple to attend a court hearing in April.

Local MP Stephen Lloyd then wrote to Santander on the Fitzgeralds’ behalf, asking it to extend its age limit for lending.

But Santander has offered just a two-month extension, in which the couple must try to sell their property. They then have up to six more months to conclude the deal. Even if they can sell the £260,000 house, they will have to hand £180,000 of it to the bank immediately.

That will leave just £80,000 — too little to enable the couple to buy another property in Eastbourne outright. 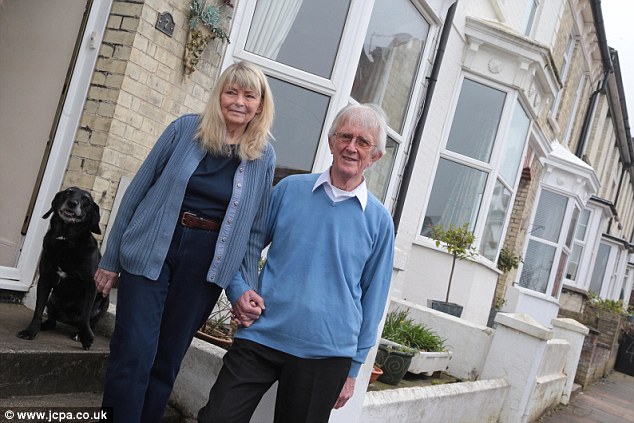 Rents are so high in the seaside resort (at around £900 a month for similar property) that they fear they will struggle to find anything suitable in their area. Even if they do, many landlords are unwilling to accept pets.

Len looked into so-called equity release — a type of lifetime mortgage where the loan only has to be repaid when you die or go into care — but has been told he doesn’t have enough equity in the house.

He would need a minimum of 40 per cent equity but only has 31 per cent.

Having exhausted all the alternatives, they are preparing to battle Santander in court.

Len, a former accountant, says: ‘It seems like a heartless decision by Santander as we have no trouble paying our mortgage.

‘The idea of uprooting at our age is horrible. I don’t know where we will go. We have lived in this area for the past 17 years and have friends and family here. It will be a hell of disruption at our time of life.’

Stephen Lloyd MP says: ‘Evicting an elderly couple who have always paid their mortgage on time appears to be an unnecessary decision by Santander.

‘I am asking the chief executive to increase the age limit like other banks have done so the Fitzgeralds can keep living in their home.’

The couple moved into their Eastbourne house in 2003, after returning home from a stint working in Zambia and Kenya. Len’s logistics business there was brought down by political instability and the couple lost most of their savings.

They were then in their 50s, but both quickly managed to find new jobs: Len as an accountant and Val as a general manager.

But in 2006, aged 64, Val left her job after restructuring at her firm. The couple began to struggle to cover the £1,000-a-month repayments, so Abbey allowed them to switch to an interest-only deal as it was cheaper.

The next year, the couple extended the loan by almost £40,000 to make home improvements to see them through retirement, including putting in new windows and a second toilet.

They say the bank, now owned by Santander, stated they must repay the loan but didn’t ask how they planned to do this. This was common practice at banks in the easy-credit boom years before the financial crisis.

Len then suffered a series of mishaps in the following years. Having found another accountancy job, he was made redundant.

He then returned to Africa to a mining company, lost his job there when the project was discontinued, and saw £11,000 go down the drain when a will-writing franchise failed.

In 2011, he was diagnosed with lung cancer and was left unable to work. Val is still employed as a chaperone escorting children to and from school.

David Hollingworth, of mortgage broker London and Country, says most customers in the Fitzgeralds’ situation will struggle to get a loan. ‘Lenders must consider whether it is doing the best thing for the borrower to allow a mortgage to run on indefinitely,’ he says.

‘If interest rates rise they may struggle to afford payments and be forced to leave their home when they are in their 80s and 90s — which would be an even more difficult situation.’

Santander says: ‘We review mortgage lending requirements on a case-by-case basis and we will always try to support our customers.

‘However, it is not in the interest of either customers or the bank to lend in circumstances where we believe that lending will become unafford-able in the future.

‘We have worked with the Fitzgeralds over a number of years to find an alternative resolution to their request for additional lending, and have guided them towards finding appropriate financial advice. We remain in contact and continue to work to help them find a solution.’