Firms such as Worldpay and Barclaycard provide credit and debit card terminals to stores, process their payments and take a cut of the money spent by consumers.

These businesses, known in the trade as acquirers, have long been accused of squeezing struggling retailers with sky-high bills which ultimately push up prices in the shops. 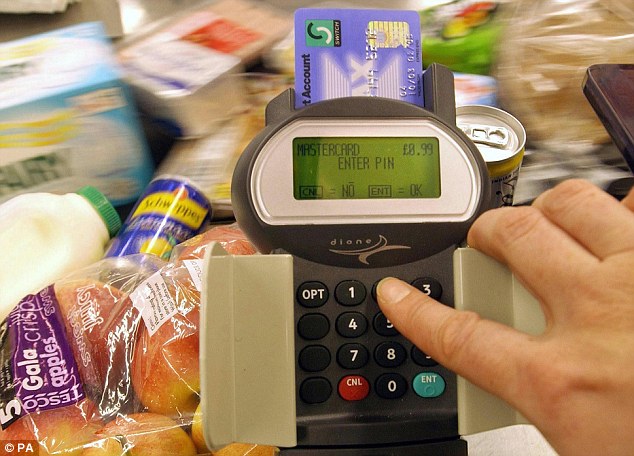 Fees furore : Firms such as Worldpay and Barclaycard have long been accused of squeezing struggling retailers with sky-high bills which ultimately push up prices in the shops

Now, the Payment Systems Regulator (PSR) is planning a review of the market to see if it is working properly.

Shopkeepers have warned the fees hit them hard at a time when the High Street is under siege from huge foreign internet businesses such as Amazon.

Mike Cherry, chairman of the Federation of Small Businesses, said: ‘A lot of the time its small retailers who are hit hardest by the many charges that come with running card payment facilities.’

The  boss of payments firm Paypoint could be hauled before MPs after its terminals stopped working.

Paypoint machines used by millions of people to top up their gas and electricity meters went down for several hours last Saturday, meaning some families lost power entirely. Tory MP Nicky Morgan, chairman of the Treasury Select Committee, has now written to Paypoint boss Dominic Taylor to ask what went wrong and if customers will get compensation.

She said that if Taylor’s response was not good enough, he could be ordered to give evidence.

The bill charged to stores by acquirers includes an interchange fee. The acquirer then passes this payment on to the bank used by the shopper to buy their item.

These interchange fees were capped by the EU in 2015, amid concerns that customers were being ripped off.

This led to major savings for the acquirers, but it is feared many pocketed the extra cash rather than cutting what they charge shopkeepers.

James Lowman of the Association of Convenience Stores said: ‘We encourage the PSR to look closely at all the fees paid by retailers to allow them to offer card payment facilities.’

PSR boss Hannah Nixon said: ‘With more of us using our payment cards, we want to make sure that retailers that accept card payments can access card-acquiring services that are competitive, offer value for money and are innovative, working in their and consumers’ interests.’