Craggy Ineos founder Jim Ratcliffe’s surprising appearance atop the Sunday Times Rich List with £22billion – he was a lowly 18th last year – comes after opening up his private company’s books.

Once described as publicity-shy and reclusive, the petrochemicals billionaire, 65, goes out of his way to maintain as high a profile as possible.

Does wily Jim think his fracking ambitions stand a greater chance if he’s seen as a Branson-like buccaneer? 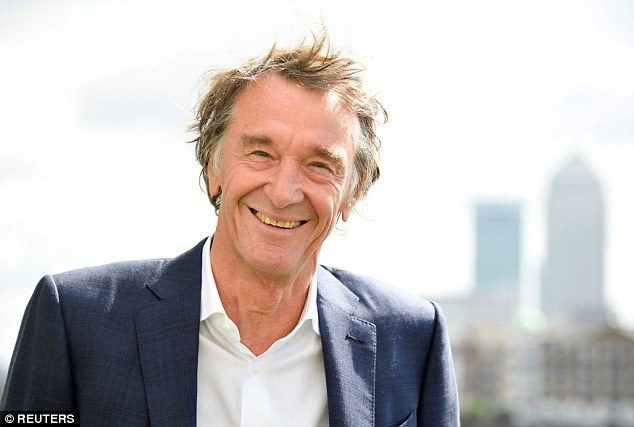 Stately former Lloyd’s of London chairman John Nelson’s portrait was recently hung in the insurer’s ‘inside-out’ building, an honour afforded to all who’ve occupied the hallowed position. Nelson, 70, a proud fellow who remains cruelly overlooked by the honours committee, hastily arranged to inspect the artist’s handiwork. Family members were brought along and tea and nibbles were dutifully provided. Considering the magnitude of the occasion, it’s a wonder an RAF fly-past wasn’t organised.

Russian billionaire Farkhad Akhmedov’s battle with ex-wife Tatiana is getting mucho ugly. After claiming not to have received the £453million awarded by a British judge in 2016, Tatiana, 41, recently hired investment fund Burford Capital to target her ex’s assets. Farkhad’s £350million yacht has been seized and Tatiana’s Medusa-like gaze is fixed upon his works by Russian-born artist Mark Rothko, valued at £50million. Sources close to Farkhad, 62, say he’ll fight her ‘as long as it takes’. A sad state of affairs which promises to keep us entertained through the dry summer months.

The exhausting build-up to Saturday’s royal nuptials prompts an opportunistic Press release from mortgage broker Trussle, which advises: ‘Saving a deposit for a home like Harry and Megan’s would take average newlyweds more than 100 years… but don’t let this put you off planning finances for married life.’ Brace yourselves, we’ve got another four whole days of this sort of rubbish.

Have you any gossip for our City diary? Email: mrdeedes@dailymail.co.uk