Two major credit ratings agencies have downgraded Turkey, predicting the collapse in the currency will trigger a recession.

Standard & Poor’s and Moody’s this weekend downgraded Turkey’s debt deeper into ‘junk’ status, and warned of a ‘hard landing’ for the economy.

Moody’s cut Turkey’s sovereign rating to Ba3, from Ba2, and gave it a ‘negative’ outlook. S&P downgraded its long-term foreign currency sovereign rating, and forecast Turkey will fall into recession next year, with the economy shrinking by 0.5 per cent. 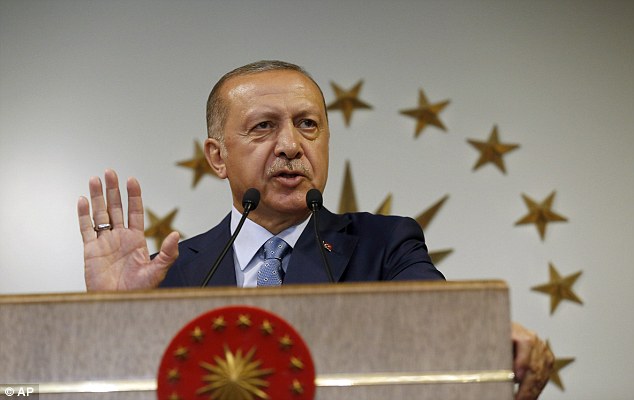 The lira has fallen by around 40 per cent against the dollar since the start of the year. It came amid a diplomatic row with the US over Turkey, led by autocratic President Recep Tayyip Erdogan, detaining a US preacher.

President Donald Trump hit back this month by doubling import tariffs on Turkish steel and aluminium. S&P predicted inflation will peak at 22 per cent over the next four months.

It said the plunging lira will increase the risk for Turkey’s banks and make it ‘increasingly burdensome’ for Turkish firms to finance currency debt.

Moody’s said that Turkey lacks a ‘credible’ plan to tackle the root causes of its financial problems. Its currency crisis has caused contagion in emerging markets, with falls in the South African rand, the Mexican peso and the Indian rupee.