DAILY BRIEFING: Airbus to team up with Rolls-Royce to develop engineer’s UltraFan airplane 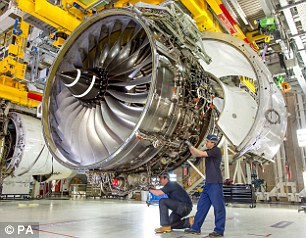 TEAMING UP Plane maker Airbus is teaming up with Rolls-Royce to develop the engineer’s UltraFan airplane engine design, to test technology aimed at making the engines 25 per cent more efficient.

SALES RISE Yorkshire chemicals firm Croda International’s sales rose 4 per cent in its core business during the first quarter of 2018, boosted by 7.6 per cent growth in personal care products.

However, overall sales were hit by a 10.2 per cent drop in industrial chemicals.

LATE PAYERS Nine out of ten firms which supply the public sector have been paid late, a survey by the Federation of Small Businesses reveals. It wants public sector late payers to face penalty charges.

PENSION DEAL The owner of B&Q has handed responsibility for £200million of future pension payments to the Pension Insurance Corporation.

PROFIT JOY Profits climbed to £62.9million in the first three months of 2018 at Swedish lender Handelsbanken, up 33 per cent on a year earlier. The bank has 208 branches in the UK.

He says the watchdog is stuffed with former staff from firms it regulates and has an amateur approach.

RICH REWARDS Profits at Credit Suisse rose £800million in the first quarter of 2018 – up 57 per cent on a year earlier – boosted by £10.5billion of investment in the wealth management arm, which targets the ultra-rich.

CONFLICT BITES International sales at Vimto owner Nichols are likely to be hit in the first three months of the year, partly due to the conflict in Yemen.

TOY STORY Peppa Pig toy maker The Character Group suffered a 38 per cent drop in profits to £4.6million in the six months to February 28. Sales fell from £61.5million to £50.5million.