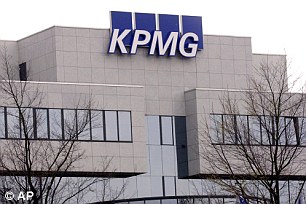 KPMG has suffered a fresh setback in South Africa

DANE QUITS The compliance chief at Danish lender Danske Bank has quit amid a money laundering scandal. Andres Jorgensen said his decision was not linked to a probe into £6.3billion of suspicious transactions at Danske’s Estonian branch.

CHINA VENTURE Hedge fund Marshall Wace has become the largest player in the industry to set up a company in mainland China. It plans to use the subsidiary to research Chinese stocks.

LOAN DEMANDS Lenders saw a jump in demand from small businesses in the three months to June, according to a Bank of England survey, which may suggest investment is picking up.

COPPER SALE Miner Rio Tinto is selling its 40 per cent stake in the world’s second biggest copper mine, Grasberg in Indonesia, to state mining company Inalum, for £2.6billion.

CLEANING UP Support services group Interserve has been hired by the NHS to manage catering, cleaning, and other maintenance services to the 450-bed King George Hospital in north-east London in a five-year £35million deal.

LAY CRAZE Pottery maker Portmeirion clocked up an 11 per cent increase in sales for the six months to June 30 compared with last year.

PIN INTEREST Bowling firm Ten Entertainment coped well in the hot spell as sales grew 3.1 per cent in the 26 weeks to July 1.

FLYING HIGH Bosses at Manchester Airport Group cheered its busiest ever June with 6m passengers, 6.4 per cent higher than a year earlier.