DAILY BRIEFING: Britain and the EU ‘must allow contracts to continue after Brexit or face chaos’ 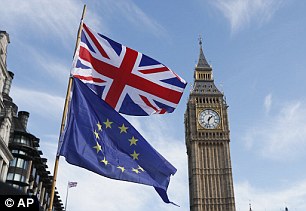 BREXIT LINKS Britain and the EU must allow millions of trading and insurance contracts to continue after Brexit or face chaos, lobby group International Capital Markets Association has warned.

GERMAN LOW Manufacturing growth in Germany has dropped to an 18-month low, a survey by IHS Markit has revealed, in a fresh sign the eurozone is facing a slowdown.

REVOLT VOTE Nearly 100 public firms have suffered a major shareholder revolt by more than 20 per cent of investors so far this year as they challenge bad behaviour and corporate excess.

SWEET LISTING Cake shop Cake Box is preparing to list on the London Stock Exchange’s AIM index, giving it a value of £43million.