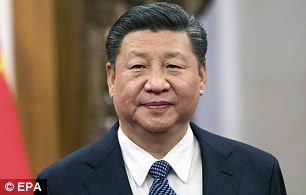 Pledge: Leader Xi Jinping is seeking to present himself as a champion of free trade

The communist regime vowed to give equal treatment to foreign and domestic businesses.

Leader Xi Jinping is seeking to present himself as a champion of free trade.

But critics claim the rhetoric is never backed up by actions, and that Xi’s rule is increasingly tyrannical.

FEE WARNING The world’s biggest retirement scheme has said it will only pay sky-high fees to stock-pickers if they managed to beat the wider market.

Japan’s £1 trillion Government Pension Investment Fund says so-called active managers will only get extra cash if they succeed, otherwise they will be paid the same as much cheaper tracker funds that aim to match the whole market.

DOUBLE UP Profits at broker Shore Capital almost doubled to £4.6million last year thanks to demand for its investment management arm. Sales rose 6.3 per cent to £41.9million.

PENSION BOOST The black hole in blue-chip firms’ pension schemes shrank by a third in a year, figures reveal. The combined deficit of FTSE 100 companies fell to £42billion in the year to June 2017.

WAGES WOE Just 41 per cent of eligible UK firms have published the pay gap between men and women – with days left before the deadline.

Around 9,000 businesses are meant to reveal their figures by next Friday.

COST FEAR Trading at water firm Pennon Group has been in line with expectations, but it expects higher costs for its incinerator in Glasgow. Annual results are due on May 25.

EASTER LIFT Brits are expected to spend an extra £80million going out over Easter, according to small business finance provider Liberis.

LENDING HIKE Small bank Cambridge & Counties has unveiled a jump in lending from £588million to £690million as it targets rapid growth.