DAILY BRIEFING: Drivers hit by rising fuel prices in July with both petrol and diesel up by an average of around 1p a litre 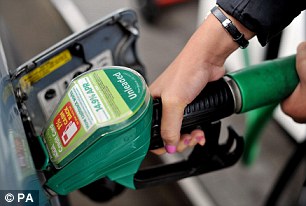 ‘Rollercoaster’ prices: Petrol and diesel rose by an average of around 1p a litre in July

PETROL PAIN Drivers were stung with the return of rising fuel prices in July, figures show.

Analysis by the RAC found that both petrol and diesel rose by an average of around 1p a litre last month.

The motoring group said this reflects a continuation of ‘rollercoaster’ fuel prices as a rise in May was followed by a decline of around 2p a litre in June. Supermarkets increased their prices the most in July.

ECO BOOST Packaging firm Mondi revealed a 6 per cent in profits to £436million after demand increased for its eco-friendly packaging. Sales also rose 4 per cent to £3.3billion.

CORE VALUES Tim Cook said Apple’s $1trillion valuation is not the most important measure of the iPhone maker’s success.

In an email, the chief executive paid tribute to the US tech giant’s staff.

APP APPEALS Taxi hailing app companies Uber and Lyft have launched campaigns against proposed rules where city officials in New York would be able to set minimum wages for drivers and cap the number of cabs allowed to work for the tech firms.

BEER BID Dutch brewer Heineken has signed a deal with conglomerate China Resources in a bid to tap into the world’s biggest beer market.

Heineken will take a 40 per cent stake in China Resources’ holding company in exchange for a licensing agreement.

ROOMS WOE Combined revenue per room at hotel group Millennium & Copthorne fell 4.3 per cent to £75.29million in the six months to June 30 as it carried out refurbishment at its Mayfair hotel.

Profits increased 3.2 per cent to £65million during the period.