DAILY BRIEFING: Easyhotel buys a plot in Cardiff with planning permission for a 120-bedroom site

DAILY BRIEFING: Easyhotel buys a plot in Cardiff with planning permission for a 120-bedroom site 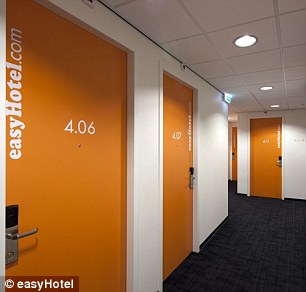 Budget hotel operator Easyhotel has bought a site in Cardiff

CARDIFF HOTEL Budget hotel operator Easyhotel has bought a site in Cardiff and has planning permission at Fitzalan Place for a 120-bedroom hotel to open in 2019-20.

IRISH TIES British lawyers have scrambled to register in Ireland so they can carry on serving overseas clients after Brexit and now make up more than 9per cent of all those listed in Ireland. It means they should face no disruption and will not have to open offices abroad.

PROFITS RISE Warehouse investment fund Tritax Big Box unveiled profits of £107.1million for the first half of 2018, up 33per cent on the same period last year. It hiked the interim dividend 4.7per cent to 3.35p per share.

SHRINKING DEFICIT The pension black hole at Britain’s top 350 listed firms shrank by £27billion in the last 18 months, says consultant Barnett Waddingham. They now have a collective £35billion pension deficit due to better market performance and life expectancy that is rising more slowly than previously thought.

BOSS OFF Des Crowley, the UK boss of Bank of Ireland Group, the oldest Irish bank, is to step down next year after more than 30 years there. He will remain a senior executive until his retirement.

DISASTER PAYOUT Miner BHP will pay £38million to settle a class action lawsuit from depositary receipt holders in New York over the Samarco dam disaster in Brazil in 2015, with no admission of liability.

GOLD BOON London’s biggest listed miner, Randgold Resources, said production rose 9per cent during the quarter to 313,302 ounces of gold. It sold for an average price of £1,007 per ounce.