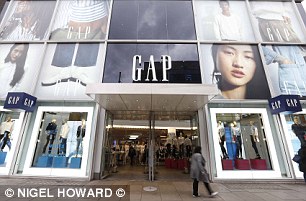 FASHION FLOP Clothes retailer Gap floundered after it revealed sales fell more than expected in the second quarter of the year.

ARMY CONTRACT Outsourcer Serco has signed a contract worth around £75million with the Australian Defence Force, beginning in January.

Serco provide services such as catering, waste disposal, facilities and ground maintenance, laundry, and welfare services to the ADF’s Joint Logistics Command, mainly in the UAE.

RETAIL ROUT The average retail share price has dived 12 per cent over the past three months according to analysts at Peel Hunt.

STEAK SAVIOURS Banking groups Investec and SC Lowy are close to buying Argentinian steak chain Gaucho out of administration. According to City AM, the banks have acquired Gaucho’s debt.

FUND BOOST Norway’s trillion-dollar sovereign wealth fund should continue to invest in oil and gas firms, according to a report commissioned by the country’s government.

Shares of European oil and gas companies fell last November when the fund’s manager, the country’s central bank Norges Bank, announced its proposal to cut the exposure of the fund.

STRIKE ACTION Workers on Total’s oil and gas rigs in the North Sea will down tools next month in a series of strikes over working rotas after talks to avert the strikes broke down this week.

RIG DEAL Engineer Rolls-Royce has been hired to provide engines for an offshore drilling rig for Awilco Drilling in Singapore.