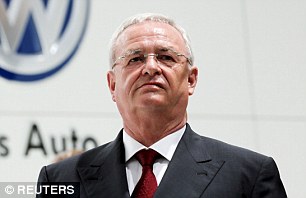 Dieselgate: Former Volkswagen boss Martin Winterkorn has been charged in a US court

CHEAT CHARGE Former Volkswagen boss Martin Winterkorn has been charged in a US federal court with conspiring to mislead regulators over the German carmaker’s diesel emissions.

Winterkorn resigned soon after the scandal became public in September 2015.

VOICE WARS Tech firm Google has ramped up its war with Amazon for people’s living rooms, making its computer voice assistant compatible with more than 5,000 devices, up from just 1,500.

Amazon’s voice assistant, Alexa, is thought to work with more than 11,000 devices.

PROFIT OPTIMISM Engineer Rolls-Royce is on track to meet full-year profit targets despite a £340million repair bill for its Trent engines.

JOBS GO Call centres in Swansea and Nottingham are to be closed by Virgin Media. It employs 14,000 workers at more than 100 sites, and said 500 jobs will be lost.

IRISH SWITCH Up to 125 Bank of America Merrill Lynch staff are to move to Dublin as part of its Brexit contingency plans, with affected employees at risk of redundancy if they refuse to go.

HARASSMENT HOTLINE Law firm Linklaters has launched a hotline for staff to report sexual harassment. It will allow whistleblowers to report inappropriate behaviour.

SOFTWARE HYPE IT bosses at many firms do not plan to use Blockchain which has been overhyped, claims new research. Gartner said just 1 per cent of chief information officers said they were using the software.

LEGO HOTEL The group behind the UK’s largest Lego exhibition, Bricklive, has signed a deal with a firm in South Korea, to launch a Lego-themed hotel.

STAKE CASH Investor Oxx has raised £74million to buy stakes in small firms. It aims to plug a gap not being filled by venture capital businesses and private equity houses, which prefer stakes in large companies.