DAILY BRIEFING: House of Fraser is ‘forced to shut its warehouses again’

DAILY BRIEFING: House of Fraser is ‘forced to shut its warehouses again amid ongoing dispute with its distribution operator’ 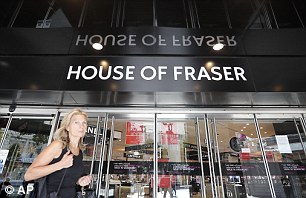 WAREHOUSE WOES Struggling department store chain House of Fraser has been forced to shut its warehouses again amid an ongoing dispute with its distribution operator XPO Logistics, according to Drapers magazine.

TELECOMS TIE-UP Telecoms group Vodafone has completed the merger between its Indian unit and rival domestic carrier Idea Cellular in a bid to create the largest telecoms operator in the south Asian country.

The deal was first agreed in March 2017 but has only received clearance from regulatory authorities.

The combined company will be named Vodafone Idea and will remain listed on the Indian stock exchange, and jointly controlled by Vodafone and Aditya Birla Group, the owner of Idea.

The business plans to buy music publishing rights, artist recordings and songwriters’ rights with the money, to tap into the growth in music streaming services.

DIVI PAYMENT Shareholders of John Laing Infrastructure Fund will be paid a dividend worth £35.4million for the six months to June 30.

SHARE SALE Tim Fallowfield, 54, company secretary of Sainsbury’s, has raked in £82,822 from selling 25,000 of the shares he holds in the supermarket chain.

AI FLOAT Tech company Renalytix AI, which uses artificial intelligence to help analyse data and treat kidney disease, is set to list on London’s junior market AIM with a value of between £43million and £55million.