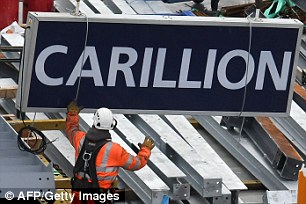 JOBS GONE More jobs have been lost following the collapse of construction giant Carillion in January, taking the total to almost 2,300.

The Official Receiver said that a further 35 redundancies were being made, while 39 Carillion employees were transferring to other firms.

TASTY FIGURES Sales have risen 13.7 per cent at ingredients maker Treatt’s to reach £53.6million over the half-year ending March 31, while profit has risen 17.6 per cent to £6.1million.

BARREL BOOST Oil and gas firm Ithaca Energy produced an average 18,615 barrels of oil per day during the first quarter, a 95 per cent increase.

PIPE CLEARED Chilean miner Antofagasta has cleared a blockage in a key pipeline from its Los Pelambres mine to the Chilean port of Los Vilos.

OIL SALE Oil supermajor Shell is selling the rest of its stake in producer Canadian Natural Resources for £2.4billion.

EARNINGS DOUBLE Profits at business lender Hampshire Trust Bank more than doubled from £4.4million to £9.9million in 2017, thanks to a jump in its loan and deposit books.

RECORD RESULTS Britain’s biggest businesses raked in a record £153.8billion in profits in 2017, research from The Share Centre has revealed.

The tax dodge sees firms shift money around using payments between subsidiaries to minimise what they have to pay the Exchequer.

SALES SURGE Online retailer Zalando posted a 22 per cent sales boost to £1.05billion during the first three months of the year, but profits fell 98 per cent to £352,000.

SPENDING CHEER Consumer spending jumped 3.4 per cent in April compared with a year earlier, according to Barclaycard data.

SNAP EXIT Drew Vollero, finance chief of Snap, the parent company of troubled messaging service Snapchat, is leaving the company next week, with Tim Stone, a vice-president of Amazon, replacing him.

IN TUNE Harry Potter publisher Bloomsbury has signed a content partnership with Spotify to make the 33 1/3 series of books about popular music exclusively available on the music streaming service.