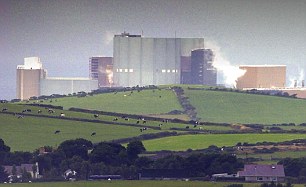 POWER PLAY Taxpayers are facing a £15billion bill for the cost of building a power station on Anglesey, North Wales, as Japanese industrial conglomerate Hitachi threatens to walk away from the project unless it gets support from the Government.

PENSION CONTRIBUTION  Telecommunications giant BT is expected to unveil plans to plug its £13billion pension deficit when it publishes its annual results on Thursday.

Analysts expect it to contribute £1billion upfront, then annual top-ups of £800million for the next 16 years.

FLOATING GYM Health chain The Bannatyne Group, founded by Dragons’ Den star Duncan Bannatyne, could rekindle plans to float on the London Stock Exchange as it eyes expansion into Europe.

SKY TAXIS Flying cars could be introduced within two years by Uber.

It will host Donald Trump’s transport chief and the US airspace watchdog at a summit in Los Angeles this week to iron out any problems.

MALL BILLCouncils are on track to spend record amounts buying up shopping centres as retailers struggle to survive online competition.

EDUCATION PAYS Tycoon Andrew Colin could earn £300million from the sale of his firm Into University, which helps universities attract high-paying foreign students. Deutsche Bank is said to be assessing takeover bids.