Ryanair is adamant that it doesn’t deliberately separate families who book flights together.

It can’t possibly be accused of such a heinous crime, its spokesman wails, because its seat allocation system is completely random.

In other words, no matter whether you are three lads heading to a stag do in Ibiza or a mother, father and moody 13-year-old on a family holiday to Crete, the chances of sitting together are the same.

Today, we reveal that those chances are one in 17,578 – worse than the likelihood of winning £100 on the National Lottery. 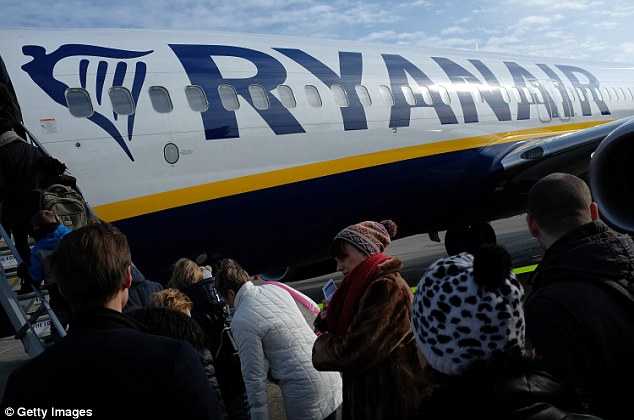 Ryanair insists It can’t be accused of deliberately separating families who book flights together, because its seat allocation system is completely random

Don’t for a second imagine that Ryanair is unaware of those extraordinarily high numbers: they are part of a crafty, and deliberate, ploy to squeeze more money out of passengers.

There’s no reason why Britain’s stingiest airline couldn’t have programmed its computers to allocate all the seats in a single booking as close together as possible.

That way, if there was an empty row when you booked three tickets at the same time you’d get seats next to each other automatically.

Yet by leaving everything to chance, Ryanair makes sure there’s practically no way you’ll all end up in that empty row unless you pay a fee, which it’s just hiked from a £2 minimum to £3 and can rise higher on busy flights.

Families with a child under 12 must pay to reserve a seat.

Budget airlines have revolutionised air travel by offering lower headline prices and charging extra for services that used to come as standard, such as reservations, snacks and a bag in the hold.

We accept these sneaky pricing tricks because they save us money… but only up to a point.

Charging more to families with children and elderly couples who need to sit together – and less for everyone else – is discrimination in my book. And that’s not on.

Unless you switched the telly on at about 12.30pm yesterday you were unlikely to have noticed the Chancellor Philip Hammond’s first ever Spring Statement.

Most of it was a snoozefest that won’t affect the pound in your pocket. However, among the (very) few points of note was a signal that Mr Hammond will stand up for people who prefer using cash to cards.

Money Mail has warned how Britain is rapidly following the likes of Stockholm in Sweden, where many shops have started taking only card or mobile phone payment as cash is made extinct.

But as the Spring Statement acknowledged, about 2.7million people in the UK are still ‘entirely reliant’ on cash.

Half earn less than £15,000 and most are elderly, vulnerable and live in remote areas – exactly the sort of people the Conservatives should be sticking up for.

Please let me know if you’re in this cash-only camp!

Our postbag is chock-a-block with moans and groans about shoddy telecoms services. Recently we revealed how BT’s lack of decent service in rural areas is driving families to install their own mobile internet masts on their roofs or even dig up the ground and lay cables into their homes.

Our letters editor Tony Hazell has received countless complaints from elderly homeowners who’ve been left without a phone line for weeks.

So it’s a welcome relief to hear telecoms providers can get it right… if they try.

Money Mail reader Diana Scholes says when she stopped being able to make calls in January, her provider Plusnet promised her line would be fixed within 48 hours.

Next day two Openreach engineers arrived at 11.30, tested her line and said the fault was at the local exchange. They returned within 40 minutes to report everything should be in working order, which it was.

‘I was so impressed with Plusnet and Openreach – at least one service provider is amazing with its quick response to phone problems,’ Diana says.

Hear, hear. The bar has been set.