DAN HYDE: We must not give in to the bullies 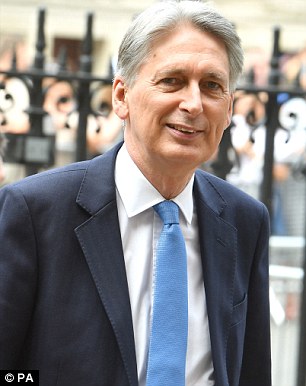 When I took over as Money Mail editor almost three years ago, it felt like family finances were threatened on all sides.

In my first week, we warned that then Chancellor, George Osborne, was preparing to raid pensions for extra taxes, and that banks were shutting branches, pushing us online and allowing scammers to dupe victims out of life savings.

Insurers, meanwhile, had become utterly addicted to ripping off loyal customers by charging them obscene amounts for motor and home cover.

Hiring a car on holiday was the financial equivalent of entering a shark tank — you just had to pray you returned home with your wallet in one piece — and families were becoming fed up with being told to install smart energy meters in their houses.

As I sign off with my final Last Word column, it is clear these dangers have grown more palpable. In fact, there is just one difference: it is now Philip Hammond plotting a pensions tax grab in place of George Osborne, as this newspaper detailed yesterday.

So while several years have passed and Money Mail will shortly have a new editor, I’m sorry to say the forces working to part you from your hard-earned cash have not disappeared. Far from it.

Sadly, the temptation for the powerful to profit at the expense of you and me is ever present. And that means we cannot afford to let our guard down and stop working tirelessly to protect our families’ wealth and futures.

One of my great privileges as Money Mail editor has been to read your letters, which still fill our postbag each week more than half a century after this section of the newspaper was founded.

Whether it’s a firm of rogue traders who fit wobbly doors and refuse to pay refunds or a crook who’s invested your pension in non-existent student housing in Brazil, your stories are at the heart of everything we do.

Our readers are our eyes and ears and, at times, you have almost seemed part of our team of fearless reporters who will stop at nothing to expose wrongdoing and hold the guilty to account.

I’ve always felt an enormous sense of duty when you turn to us for help. My only regret has been that we cannot take on every case — there are just too many. But not a single letter, email or telephone call is wasted.

Every one is read by a member of the team — and, without printing your stories in the paper, the successes we’ve achieved would have been impossible.

Watchdogs in Spain, for example, would never have agreed to investigate the holiday car-hire scandal if it wasn’t for the hundreds of examples you sent in.

The terrifying fraud failings at Santander in 2016 would have gone undiscovered and unchecked if brave victims hadn’t come forward to testify.

Without your overwhelming support for our campaign to unlock cash tied up in pension annuities, Phoenix Life would surely not have allowed 20,000 to cash in.

So thank you to everyone who has taken time to tell us their story. Please keep them coming.

As I leave Money Mail in the capable hands of Victoria Bischoff, who will be taking over this column from next week, I can impart some good news.

Our three main crusades this year — extending the pension freedoms to all retired savers, stopping the smart meter hard-sell and returning millions of pounds to victims of online fraud — are gathering pace.

My hope is that we shall see serious progress in one or more of these vital areas over the coming months.

On top of that, I know that Victoria, who has done exceptional work forcing banks to improve their treatment of the bereaved, will continue to fight your corner.

We must not give in to the bullies who would have their way with our finances if left unchallenged.

‘A great need in Britain today is advice about money, how to save it, how to use it, how to spend it and how to avoid paying too much tax on it. Money Mail aims to fill that need.’

Thankfully, that vow, too, will never change.