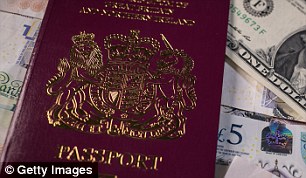 It lost the contract to Franco-German rival Gemalto this year and did not appeal despite warning it could damage jobs.

He said: ‘The UK passport contract is one of about 40 contracts that we have.

‘OK, it’s quite large but our international ID business has actually progressed really well. So we are going to learn the lessons that we can from the bidding process in the UK, but not overreact to it.’