Demand for additive-free and organic pet food has rocketed as the healthy eating craze spreads to animals.

The health food market for pets is now worth £430 million a year, according to Sainsbury’s, with animal lovers willing to spend more cash than ever on gourmet meals. 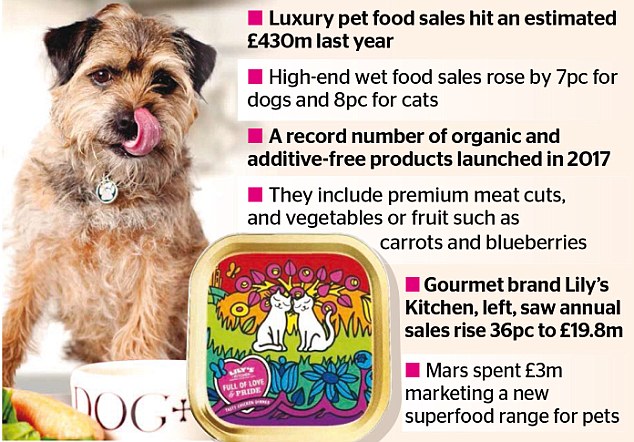 And the market is continuing to get bigger, with sales of high-end cat food up 8 per cent last year and premium dog food up 7 per cent.

Mars – which owns Whiskas – has launched a new superfood range for cats and dogs called Perfect Fit, with vitamins and nutrients designed to keep them lean, boost their immune systems and support a healthy coat.

One of the most successful players is Lily’s Kitchen, which was set up by Henrietta Morrison after she decided her terrier Lily’s mass-produced food was making the dog ill. It mixes premium cuts of meat and fish with fruit, vegetables and botanicals, with 24 cans of dog food costing around £50.