Deustche Bank moves half of its ‘euro clearing’ activity to Frankfurt

Deutsche Bank has moved half of its euro clearing business to Frankfurt in a signal City business could shift from London into the EU over Brexit.

The move, which is largely symbolic as clearing is an electronic process, comes amid growing concern about a no deal Brexit.

In January almost all of Deutsche Bank’s clearing was done in London. Clearing is the process by which banks act as a middleman for a buyer and seller of financial contracts.

The move will fuel fears the City of London could lose its status as a leading financial hub if there is uncertainty about how the market is run.

While moving the process of clearing will impact on few jobs direcly the knock-on effects could start to reverse decades of centralising financial services in London – an industry which has become the mainstay of the British economy. 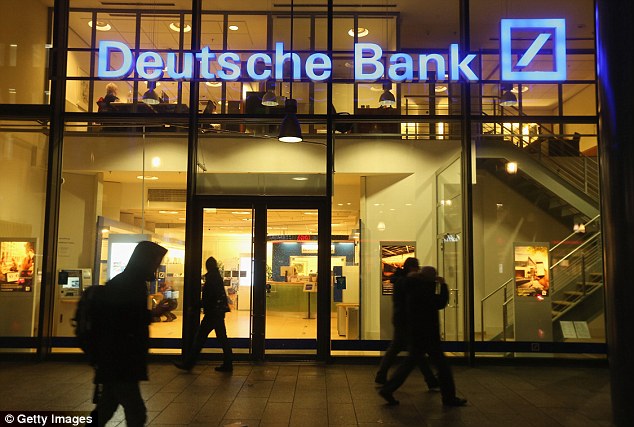 Deutsche Bank’s global co-head of institutional and treasury coverage told the FT the move had not led to a wholesale relocation of jobs.

Hubertas Vath, chief execuitve of the marketing group Frankfurt Main Finance, said shifting euro clearing from London to Frankfurt had been ‘top of our priority list from the very first day after the Brexit referendum’.

While only a handful of jobs are linked to the process, the knock on effects of centralisation in London has seen most trading floors move from Germany to Britain over the past 30 years.

Mr Vath said: ‘This was the best chance to bring them back.’

A Deutsche Bank spokesman said that the bank is effectively pushing a different button to route the clearing to Eurex, Deutsche Boerse’s clearing division.

A spokeswoman for Eurex said that it now has a market share of 8 per cent of all euro clearing, up from virtually zero a year ago.

Last month Germany’s finance minister Olaf Scholz said it was ‘indepensable’ that clearing was carried out ‘in full conformity with EU standards,’ suggesting Frankfurt would be the natural place.

Since the referendum there have been repeated claims as many as 100,000 jobs could move from London to financial centres on the continent.

But most banks have frozen or cancelled draft plans to actually move jobs as talks on maintaining regulatory standards after Brexit continue.