Dollar is 30% overvalued against the pound, says ‘Big Mac’ index

The US dollar is overvalued against most of the world’s currencies, including the pound and euro, according to the latest Big Mac index from The Economist.

As global trade tensions escalate, the long-running light-hearted index based on the popular McDonald’s burger shows the dollar is 30 per cent overvalued against the pound and 16 per cent against the euro.

The index, which was launched 32 years ago, is an informal way of measuring the purchasing power parity between two currencies. 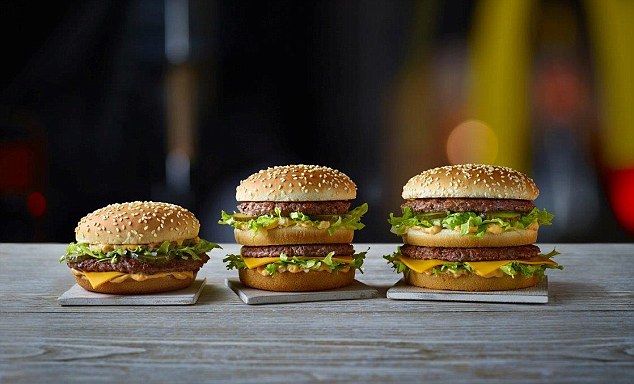 Burgernomics: How the index works – pictured top, the Big Mac in the middle, with a Mac Jnr and Grand Mac either side

The concept is that in the long run, exchange rates should move towards a rate that would equalise the prices of an identical basket of goods and services – in this case, the iconic double burger – in any two countries.

The Big Mac is used as it is a similar product that is widely available in almost all of the world’s countries.

Movements in exchange rates without similar shifts in burger price, can send a currency up or down the long-running index.

The Economist said: ‘Since [we] last updated the Big Mac index (BMI), our lighthearted guide to currency valuation, burger prices have remained constant in 19 of 44 countries. But every currency has shifted in value.’

It added: ‘Big movements in exchange rates, without similarly supersized shifts in burger prices, can send a currency up or down the index.’

The Economist said that markets pricing in a view on future events can weigh on a currency, adding that its data shows the pound has been particularly cheap since the EU referendum vote in 2016.

With the US economy performing relatively well and the Fed raising rates, the dollar has strengthened.

It says only the Swiss franc and Swedish krona look overvalued against the dollar, at 19 per cent and six per cent respectively.

The Norwegian krone now looks undervalued by five per cent, having looked overvalued by 18 per cent in January.

However, this was due to McDonald’s cutting the price of Big Macs by 14 per cent there rather than the dollar’s strength against the krone, the index says. 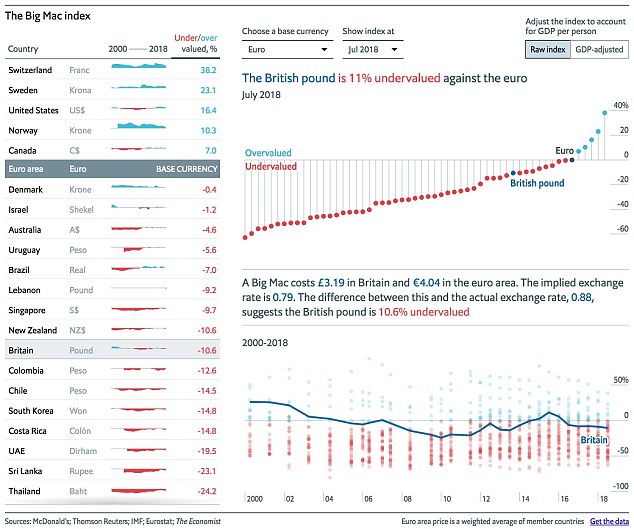 Nuggets: The interactive index shows how overvalued or undervalued a currency is against the dollar

The biggest mover from January was the Argentinian peso, whose recent collapse against the dollar took it from looking 25 per cent undervalued to 51 per cent now.

Egypt’s pound is now the cheapest looking currency in the index – it is 68 per cent undervalued against the dollar.

A country with an unstable economy or substantial amounts of debt, particularly with the fear of default, will find itself near the bottom of the pile.

Expectations of whether a country will raise or lower interest rate sin the future also affects demand for its currency, with higher future rates indicating an increasing return from holding it.

The US dollar is used as a standard against which to measure others, as it is the world’s major reserve currency, used to settle a huge amount of global trade, and US government bonds are seen as a safe haven asset.

However, a currency riding high or low against the dollar can also reflect that the US currency may be considered under or overvalued. With the US economy running hot, the Federal Reserve raising interest rates and protectionist trade policies, this is a concern at the moment.