The Royal wedding later this month is likely to prompt a surge in demand for Royal memorabilia, with the most sought-after pieces soaring in value.

Yet before dusting off any mugs sitting on top of the sideboard, be aware that a lot of Royal collectables are no more than worthless junk.

It is only rare and older artefacts relating to the Royals – not mass-produced ‘limited edition’ cups, coins, plates and novelty tea towels – that make collectors any money on their investments.

Antiques trader and Royal memorabilia collector Ann Parker believes the main motivation for any collector should be a wish to commemorate a Royal occasion. Making a profit, she says, is simply a bonus. 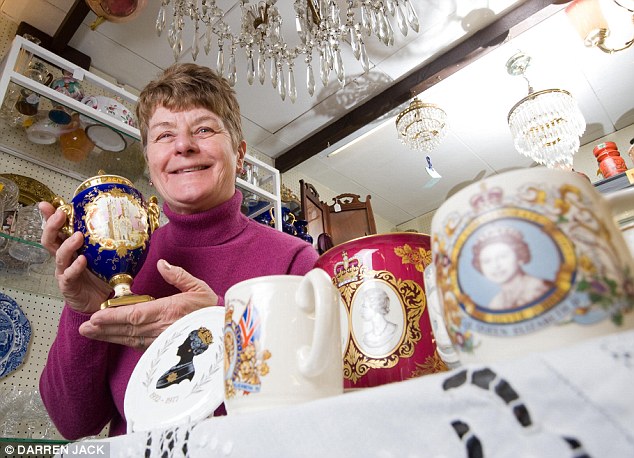 Cherished: Memorabilia collector Ann Parker with some of her artefacts

The 61-year-old, from Hungerford in Berkshire, says: ‘I am a big fan of Queen Elizabeth II but I do not expect to get rich quick collecting items relating to her reign – I do it for pleasure.

‘It is only the rarest limited edition pieces, something historic or unexpected mistakes in the manufacturing process that hold any investment appeal.’

Among her Royal favourites are loving cups. These have two handles that are easily broken and cracked ceramics are worthless. But even rare surviving cups tend only to keep their value rather than rise in price.

Unexpected Royal events can be good for boosting demand and values. For example, a May 1937 coronation mug for Edward VIII is worth just £20 but an altered ‘abdication’ mug – after he stepped down in December 1936 – can easily fetch £100. Unpopular Monarchs can also increase prices.

After ‘mad’ King George III died in 1820, his unpopular philandering son George IV took over. No one wanted his mugs and rare survivors today are valued at £3,500.

The commemorative market in Royal memorabilia only really took off under the reign of Queen Victoria. It enabled subjects to have an idea of what she looked like on a piece of pottery which then took pride of place on the mantelpiece. Cups for her 1838 coronation are rare and command prices of £1,000 but later Diamond Jubilee mugs from 1897 are worth just £20 – as by this time the mass-production Royal commemorative industry was thriving. 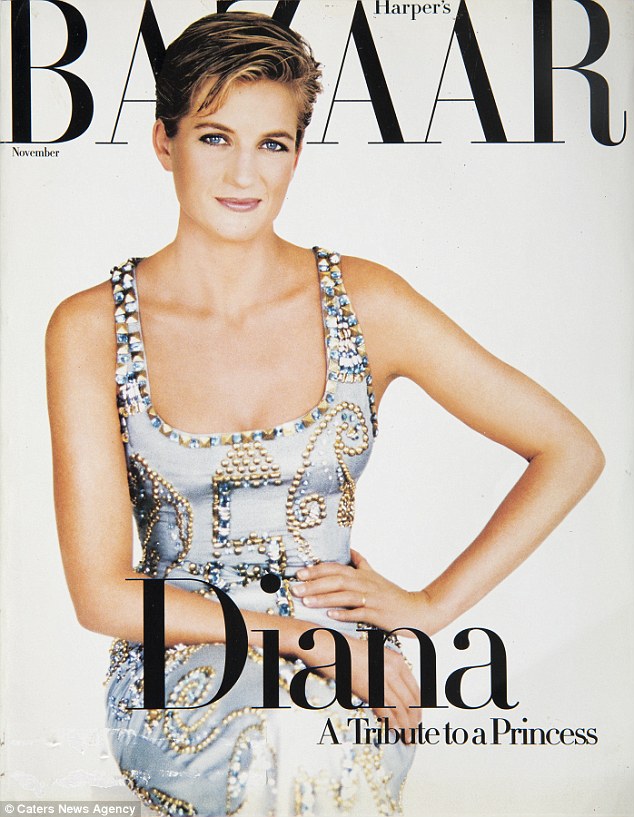 As cherished as commemorative mementos of Prince Harry and Meghan’s betrothal may well be, they are unlikely to ever be worth in the future more than they cost.

But Paul Fraser, who runs a collectables business in Bristol, believes that a knock-on effect of the impending wedding could be a surge in the value of items once owned by the Royal Family – for example, dresses.

Fraser says: ‘Mass production of Royal memorabilia means the market will be saturated for years to come. If you really want to profit from Royalty then it makes sense to buy something different.’ He says items that once belonged to Princess Diana – who died aged just 36 in 1997 – are particularly collectable with prices recently jumping in value.

A blue Raleigh Traveller Bicycle she was ordered to stop using when she became engaged to Prince Charles in 1981 – dubbed the ‘shame bike’ – sold for £9,200 earlier this year, having previously exchanged hands in 2008 for £211. Clothing once worn by the Princess is also highly valued and sought after. Renae Plant, from Los Angeles in California, owns two Princess Diana dresses. These include a burgundy wool Caroline Charles she bought for $125,000 (£92,000) in 2014.

Renae says: ‘I grew up in Australia and Princess Diana visited in 1982 when I was a schoolchild in Queensland. Ever since the Royal wedding the year before I had been in awe of her – her rise to become a Princess was such a fairytale.

‘She was the first Royal to remove her gloves and shake the public’s hand, and amazingly she shook mine. She made people feel close to her even though they did not know her. To share a piece of her tragically short life is a privilege.’

Renae, who runs a nursery, believes the two dresses are worth £1million because of their iconic status. She has lent the Versace dress to a special exhibition Diana – Her Fashion Story currently being held at Kensington Palace in West London.

Those who cannot afford to invest in such Royal garments might instead consider snapping up an autograph. Fraser says: ‘Protocol prevents the Royal Family from signing autographs, so signatures are scarce.’

Interest surrounding the latest Royal marriage has led to the price of Prince Harry’s signature doubling over the past year to £1,500. A Christmas card from 1982 that was signed by Prince Charles and Princess Diana can now sell for £2,000.

You can have your cake… just don’t eat it!

Those invited to Prince Harry and Meghan Markle’s wedding reception in 13 days’ time might be lucky enough to be handed a slice of their cake.

But rather than tucking into the lemon elderflower treat – which is being made by Californian pastry chef Claire Ptak – investors would be wise to pocket it. Collector Paul Fraser is offering £1,000 for a slice of the wedding cake. 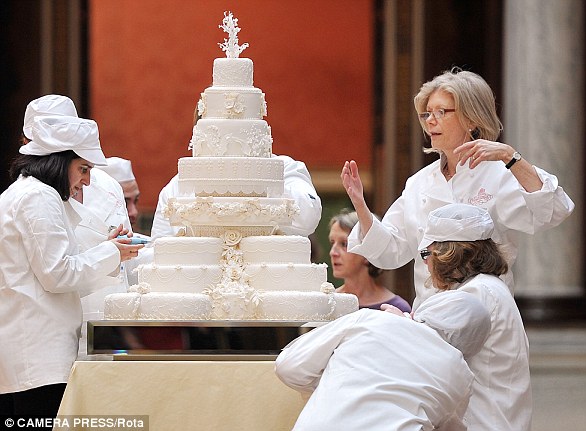 Meanwhile, a slice of the four-tier 9ft high cake to celebrate the 1947 wedding of Queen Elizabeth II with Prince Philip sold for £560 in 2013.

A piece of 1840 iced fruitcake for the wedding between Queen Victoria and Prince Albert went under the hammer for £1,500 in 2016.