Drivers are wasting £250m a year on ‘rip-off’ MOT checks

Drivers are wasting £250 million a year on ‘rip-off’ MoT tests and unnecessary repairs, according to a prominent think-tank.

The Adam Smith Institute is urging ministers to ditch the MoT test, describing it as ‘outdated’ and a ‘classic case of poor policy’.

It wants the Government to ‘bring itself into the 21st century and focus on driver error’, which is by far the main cause of accidents.

But the AA says abolishing the MoT would be a ‘dangerous’ move and result in more deaths and serious injuries. 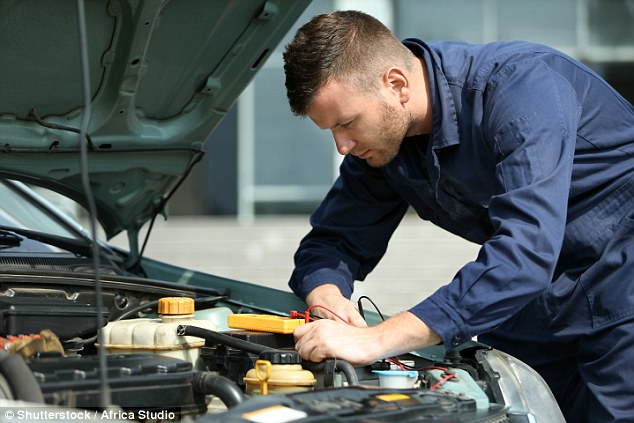 Drivers are wasting £250 million a year on ‘rip-off’ MoT tests and unnecessary repairs, according to a prominent think-tank. The Adam Smith Institute is urging ministers to ditch the MoT test, describing it as ‘outdated’ and a ‘classic case of poor policy’ (file image)

The annual test of a car’s roadworthiness was introduced almost 60 years ago to deal with the problem of old, unsafe vehicles on the roads – many of them manufactured before the Second World War.

But the think-tank report said cars had become much safer and more reliable, and motorists were paying out more than £250 million a year in MoT test fees and unnecessary repairs from ‘less scrupulous garages’.

The MoT costs up to £54.85 for cars and £29.65 for motorbikes. The average fee for a car is £33.60, according to the report. On top of this, the average driver will pay £143 in repair costs to ensure they pass the test. The report said just 2 per cent of accidents in the UK were caused by mechanical failures, with nearly two-thirds caused by driver error, including speeding and driving under the influence of drink or drugs.

The report’s author, Alex Hoagland, said: ‘The UK has required MoT testing for decades in order to prevent crashes and fatalities from unreliable vehicles.

In January, Utah became the 34th US state to scrap the equivalent of the MoT. A Government report comparing crash rates between states found no evidence that mandatory safety testing reduced fatality rates.

It added that improvements in the safety of cars had helped to reduce the number of deaths on Britain’s roads by 44 per cent in ten years – from 3,172 in 2006 to 1,792 in 2016. The Ministry of Transport test – later shortened to MoT test – was introduced in 1960 to crack down on unsafe second-hand vehicles. Most had been manufactured before 1940 and many had never been serviced.

The test required vehicles over ten years old to undergo an annual assessment of steering, brakes and lighting. It has become stricter, then with drivers of cars more than three years old now required to take an annual test.

Pass a breath test to start your engine

A police force has become the first in the UK to fit drink-drive devices to cars – stopping them from starting if the driver is over the legal limit.

Under a scheme by Durham Constabulary, motorists will have to pass a breath test in order to start their engines.

‘Alcohol interlocks’, common in countries such as the US and Denmark, will be fitted to offenders’ vehicles on a voluntary basis.

In County Durham, 285 road accidents in the past three years are suspected of being linked to alcohol.

It is hoped that the devices, free of charge to anyone in the force’s area, will help to cut the number of drink-drivers on the roads and prevent further accidents.

Detective Inspector Andy Crowe said the project would ‘help identify and deal with potential drink-drivers before they even get behind the wheel’.

The scheme is being run as part of the force’s Checkpoint programme, which aims to divert offenders away from crime by addressing the underlying causes of their criminal behaviour.

But the AA said calls to scrap the MoT ‘flies in the face of driver opinion’, with 94 per cent of motorists in a recent poll saying it was ‘very’ or ‘quite’ important to road safety. It said the risk of mechanical failures resulting in death or serious injury would ‘increase substantially’ if the MoT was abolished.

AA president Edmund King said: ‘The MoT is appreciated by the vast majority of drivers and means that at least once a year, for cars over three years of age, there is an independent check on safety and vehicle emissions. It would be a backward and dangerous step to scrap it.’

Kevin Clinton, head of road safety at the Royal Society for the Prevention of Accidents, said: ‘MoT testing helps to minimise the number of unroadworthy vehicles on the road, as it ensures motorists are getting their vehicles checked on a regular basis.

‘Tens of thousands of vehicles fail their first MoT test due to faults such as tyre defects, brake failures, steering defects, or problems with the driver’s view of the road or with their seatbelt and restraint systems. All of these are failures in safety-critical items.’

The Department for Transport said: ‘Although modern cars are better built and safer than those that existed when the MoT test was introduced 58 years ago, there are still fatal accidents every year as a result of vehicle defects.’