Early adopters of Help to Buy, get ready to tighten those belts, says SALLY HAMILTON

It is tough getting a toe on the housing ladder – official figures confirm this with just 28 per cent of the population now borrowing to buy a property compared with 37 per cent a decade ago.

Would-be buyers need to grab all the assistance they can get. Unless you have access to a generous Bank of Mum and Dad, any help is likely to come via schemes with strings attached.

Thousands of first-timers who took advantage of the Government’s Help to Buy equity scheme – launched five years ago – are about to be reminded of the extra price to pay for the support received. 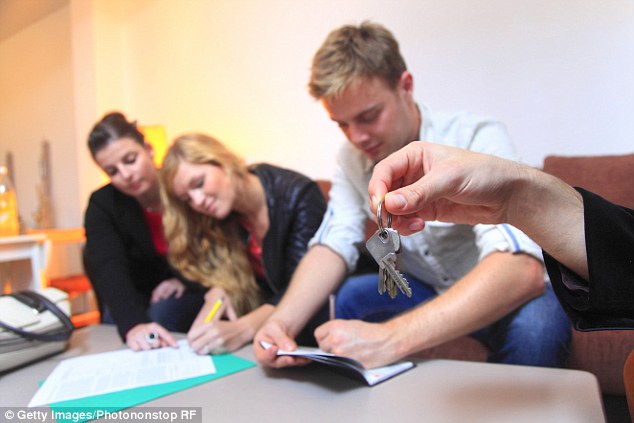 Help to Buy: The five-year interest-free period is almost up for the early adopters

The scheme, which began in April 2013, allows borrowers to take out an interest-free loan of up to 20 per cent of the value of a new-build property worth up to £600,000 – so long as they can scrape together a five per cent deposit.

A London-only version allows 40 per cent equity loans. The arrangement enables them to find more affordable mortgage rates. In return, the borrower must pay the Government back – plus a share of any increase in the property’s value when it is sold.

But the five-year interest-free period is almost up for the early adopters. Many of these are in for a nasty surprise because their monthly repayments are about to shoot up. There is no such thing as a free lunch.

From next month they will have to start repaying 1.75 per cent interest on the Government loan (and the rate will rise annually by the Retail Price Index, currently 3.6 per cent, plus another 1 per cent). Someone who took a 20 per cent loan on a £600,000 property will be paying an extra £175 a month, says broker London & Country.

The average borrower in London who took advantage of the 40 per cent scheme in the summer of 2017 can expect to be paying £2,885 of annual fees in 2022, rising to £3,002 in 2023. Borrowers who have not prepared for these higher costs will need to tighten their belts.

Lindsay Judge, of think-tank the Resolution Foundation, believes that many borrowers will have forgotten about the impending charge.

She tells me that in the excitement of buying their new home, something happening five years down the line was probably not on their mind.

‘Even if it was, they probably thought they would be earning more and it would not be an issue,’ she says. But pay rises have been barely noticeable and some of these pioneer borrowers could well struggle.

What should you do if you do not want to be saddled with an ongoing extra fee which will balloon over time? Selling the property and repaying the loan is one option, while those with savings could pay off the loan in part or in full. Either way this comes with its own cost.

Homeowners must pay for a property valuation as well as repay the Government its share of any increase in the value. It may be cheaper to keep paying the fee for those who are not selling up.

Remortgaging with the existing lender or to a rival is an alternative. Signs are some lenders have spotted an opportunity. Skipton and Hanley building societies are among lenders offering Help to Buy ‘exit loans’ with incentives such as free valuations. Barclays bank offers its standard range to this group.

Mortgage rules have tightened in recent years so it may not be a smooth process. Graham Sellar, mortgage sage at Santander, urges those facing challenges not to ignore correspondence and ensure they have set up a direct debit in time for their first payment – failure to meet this could impact their credit rating. Looming: The deadline for making use of this year’s Isa allowance is April 5

Hurrah, the clocks have gone forward. I am officially full of the joys of spring and plan to be out sorting the garden today. Then I will turn my attention to tending my finances.

The deadline for making use of this year’s Isa allowance is looming fast and I do not want to miss it. Nor should you. Even if you (like me) can’t manage the full allowance of £20,000, it makes sense to save what you can.

In an Isa, your savings can grow free of capital gains and income tax. Miss the April 5 cut-off date and this year’s allowance is lost forever. Equally important is to ensure hard-earned savings are not in dud accounts.

As I reported recently, thousands of people who were given National Savings & Investments Children’s Bonds as youngsters have failed to cash them in, long past their maturity.

Up to £500million worth is now sitting in NS&I’s ‘residual account’ paying just 0.1 per cent. Claim your forgotten bonds now – you could even put that cash in an Isa.