Edinburgh Worldwide is very much in expansionist mode.

Having issued a bundle of new shares earlier this year to meet insatiable demand from investors, the trust has just done the same again and intends to issue more before the year is out.

It is no surprise that the trust’s board is in such an ebullient mood. Under the management of Doug Brodie, the fund is recording some eye-catching performance numbers.

In the past year alone, shareholders have enjoyed returns above 48 per cent, far in excess of the profits generated by most of its global fund rivals.

It is the investment process that underpins this team which is applied to Edinburgh Worldwide and a sister investment fund Baillie Gifford Global Discovery.

As the title suggests, ‘discovery’ is all about finding companies that are likely to deliver long-term returns – a result of a clearly defined growth strategy adopted by management and often an intention to reshape the industry they are part of.

Only businesses with market capitalisations of below $5 billion (£3.8 billion) are considered, although once a stake is bought, the discovery team runs with it.

There is no top slicing – selling small parts of a stake to crystallise profits.

Long term, not short term, is the name of the discovery game – as is patience – and Brodie’s team are quite happy scouring the world for opportunities. Currently, Edinburgh Worldwide holds just over 100 stocks.

Although the trust could easily be badged a smaller companies fund, Brodie believes this would undersell what it is all about.

He says: ‘What we are doing is looking for great undiscovered investment ideas. We want to understand the businesses we invest in and then incubate them.

‘They are not smaller companies. Many are businesses with global ambition that do not want to remain small. It is a vision we share. We want to participate in their long-term success.’ 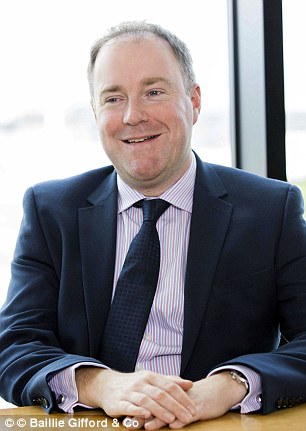 Such emphasis on the long term means Brodie gets annoyed when any of the companies held by the trust are bought by rival businesses.

Brodie says such acquisitions are inevitable given the ground- breaking nature of the work many of the bought companies are involved in.

But he would rather them remain independent so that he can run with them long term.

Ocado, a top three holding in the trust, embodies everything Brodie likes in a business.

He adds: ‘Ocado is a proven disruptor. Although most people view it as the company which delivers groceries for Waitrose and Wm Morrison, it has successfully exported its business model overseas. It now has its tentacles in France, Spain, Sweden and the US. It has been an 18-year journey, but it has thrived on the back of the business disruption it has caused.’

Brodie is assisted on the trust by deputy managers Luke Ward and Svetlana Viteva. A small portion of the trust – 2.5 per cent – is invested in unquoted businesses, which differentiates it from Global Discovery, as does its ability to borrow to increase its exposure to equities.