Elderly expats in Europe face losing access to their pension income and other financial services if there is a ‘no-deal’ Brexit.

One of a stream of new technical papers on Brexit preparations says that annuities – which people rely on for a regular pension income – are among the financial products which expats could struggle to receive.

Lending and deposit services and insurance are other services under threat if you are an expat. Meanwhile, British online shoppers and tourists visiting the EUcould face millions of pounds in credit card charges, it has emerged. 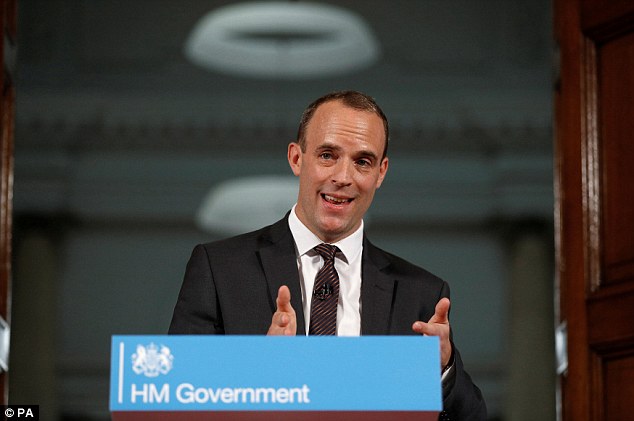 Pensions warning: Brexit Secretary Dominic Raab delivers a speech in central London on preparations for a no deal scenario

The prospect of expats in the EU seeing their pension payments stopped if there is a no-deal ‘cliff edge’ Brexit was raised by influential House of Commons Treasury committee chair Nicky Morgan MP last year.

She backed industry calls for the issue to be addressed in the Brexit talks, after the Association of British Insurers warned that unless a deal was reached, pension firms could face a choice between breaking their promises to people and businesses or breaking the law.

Morgan, who put the Treasury on alert in a letter to Chancellor Philip Hammond, said: ‘The possibility that UK providers may not be legally able to pay out pensions or insurance contracts to citizens in the EU – including UK expats – is a stark example of the consequences of a “cliff edge” Brexit.’

Early on in the negotiations, there was news that expats in the EU look set to keep annual increases in the state pension and still get healthcare paid for after Brexit.

However, experts cautioned at the time that this would not be nailed down until a final deal was reached.

The documents released today said the Government was committed to putting unilateral action in place if necessary to resolve issues as far as possible on the UK side.

‘For UK-based customers who access banking, insurance, investment funds and other financial services with EEA firms currently passporting into the UK, temporary permissions will enable these firms to continue to provide these services to UK customers for up to three years after exit – allowing firms time to apply for authorisation to continue operating in the UK’, the documents said.

This means these firms will be able to continue as before if they receive authorisation covering the full scope of services they currently provide.

Regulators will consult this autumn on arrangements for coverage to continue, the documents said.

Hugh Savill, director of regulation at the Association of British Insurers, said: ‘Leaving the EU without a deal would cause major inconvenience to millions of pensioners, travellers and drivers.

‘We urge the Government to agree a deal as a matter of urgency.

‘Today’s paper emphasises the risk of insurers not being able to make payments to customers based in the EU after the end of March next year.

‘Obviously insurers want to meet their commitments to their customers, but this problem has the potential to affect millions of insurance customers, including UK pensioners overseas.

‘It can be fixed by co-operation between the UK and EU regulators – if the EU authorities wish to do so.

‘Insurers have of course been making contingency plans for their own operations for many months now, but this contract issue is not one that insurers themselves can fix.’

Stephen Jones, chief executive of financial services trade body UK Finance, said: ‘A “no deal” scenario can and should be avoided.

‘Both the UK and our EU partners should focus on agreeing a managed exit and a clear framework for cross-border trade including in financial services.

‘However, it is right that contingency plans are made to minimise disruption for consumers and businesses on both sides of the Channel in the event of a “no deal”.

‘The government is taking a pragmatic approach to addressing critical cliff-edge issues and to ensure consumers and businesses can continue accessing vital cross-border services.

‘However, these issues cannot be addressed by the UK acting alone. It is therefore vital that negotiators on both sides work together to agree solutions that prevent any unnecessary disruption and additional costs for customers in both the EU and UK.’