Electric car firm Tesla has issued its biggest recall ever because of a defect in the steering system of its Model S sedan.

The electric car firm said there had been no accidents or injuries but it was recalling 123,000 of the high-tech vehicles to fix the fault. 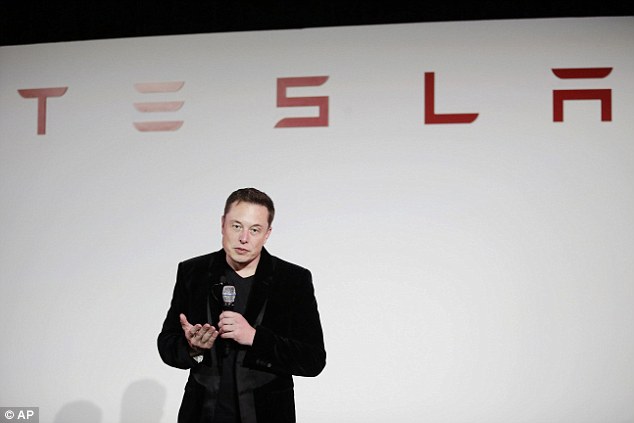 Getting his message across: It has been a rough week for Elon Musk’s firm, which has taken a battering on the stock market

The steering system uses bolts, made by German supplier Bosch, which can corrode after contact with road salt in cold temperatures. Were they to fail, the driver would still be able to steer but would need to use more force due to the loss of power assistance.

A fix in one of the company’s service centres should take about an hour, Tesla added. It caps a rough week for Elon Musk’s firm, which has taken a battering on the stock market.

Tesla shares have fallen by more than 12 per cent since Monday after its credit rating was downgraded, largely due to ongoing doubts it will hit production targets for the long-delayed Model 3 and a probe into a fatal crash involving one of its cars.

Musk and Tesla are also facing a legal battle over the takeover of clean energy company Solarcity in 2016. The mounting concerns have wiped £4.6bn off Tesla’s value over the past two days alone.