Electricity demand from electric cars could be too high 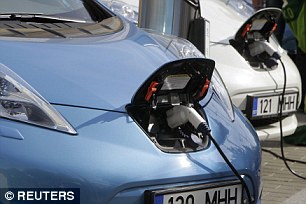 Electricity guzzlers: As many as 36m electric cars could be on UK roads by 2050

As many as 36m electric cars could be on UK roads by 2040 – putting a major strain on the electricity grid, experts predict.

The Government is promoting electric cars over combustion engines under plans to slash greenhouse gas emissions.

It wants to ban new conventional cars by 2040 as well as have new homes and street lights fitted with electric car charging points.

That is likely to increase peak demand electricity by about 8GW – roughly the output of 2.5 nuclear power stations.

However, that is less than previous forecasts as experts predict cars will be charged at off-peak times.

Drivers can also sell electricity from their cars back to the grid when not being used.

The National Grid yesterday predicted autonomous cars will be on roads by the late 2020s.