Employment in the UK hits a record high, ONS says

The number of people in work has hit 32.4 million – the highest since records began in 1971 – new figures released today show.

The Office for National Statistics said that 388,000 more people have jobs compared to a year ago.

The figures are a welcome glimmer of good news for Theresa May as her Government is engulfed in a Brexit crisis which is threatening to tear her party apart.

But families are facing a fresh squeeze as wage growth falls for the second month running as employers are still refusing to give big pay rises.

The figures, released this morning, show that while more people are in work than ever before the number who are unemployed has fallen.

But Tory MP and former minister Nick Boles seized upon the figures to lash out at the Prime Minister and her crisis-hit Government.

Tweeting a link to the figures, he added: ‘Good to have something to  cheer about. Boy do I miss the Cameron Government.’ 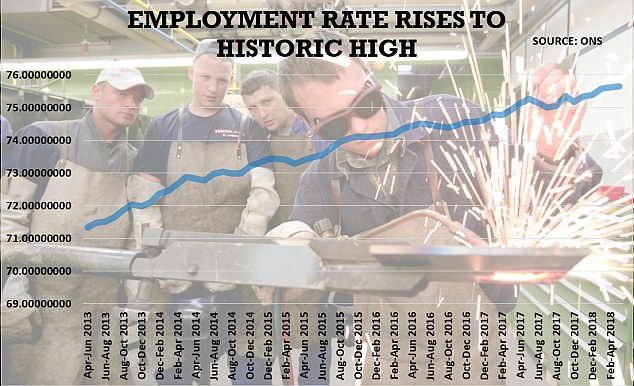 The Office for National Statistics said that 388,000 more people have jobs than a year ago. 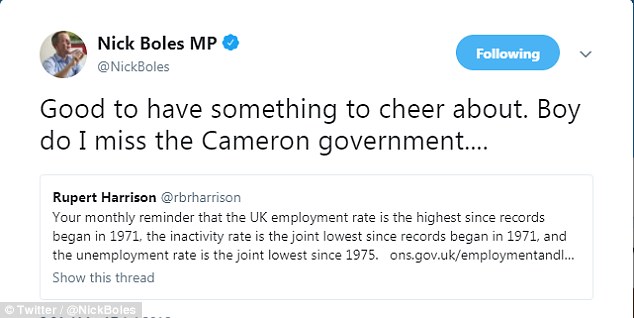 But this growth in wages has slowed over the past two months – meaning families are facing a fresh squeeze.

Uber drivers have won a landmark case to be given employment rights.

An employment tribunal rules last year that drivers with the car-haling app should be classified as workers in a case brought by the GMB trade union.

It paves the way for the drivers to be given key rights including holiday and sick pay.

But Uber is appealing the case at the Supreme Court – insisting its drivers are self employed and they should not have to fund the employment protections.

The GMB trade union has slammed the £51 billion San-Francisco transport giant for fighting ‘tooth and nail to deny drivers the rights to which they are entitled’.

And while ministers have hailed the jobs boom, Labour and trade unions have warned that the rise is being fuelled by a huge growth in insecure work.

There has been a big hike in the number of workers on zero hour contracts in recent years.

While the growth of the gig economy has seen drivers for firms like Uber and Deliveroo work without being given the same employment rights – including holiday and sick pay and pensions – as others.

The GMB has won a landmark case for Uber drivers to be classified as workers and get better employment rights – but the car hailing app is currently appealing the case.

A survey by Survation and the GMB trade union last year found that up to 10 million workers – around a third of the workforce – had insecure jobs.

Experts have warned that this stores up a ‘ticking timebomb’ as millions of workers do not have pension pots which employers must pay into.

‘The welcome news on employment is particularly good for those who are being brought into labour market either for the first time, or after a long spell out of work.

‘Unfortunately the news for people once they are in work is less positive, as pay growth continues to disappoint.’

TUC General Secretary Frances O’Grady said: ‘Wage growth has slowed again. Boosting pay packets should be a priority for the government, but ministers are failing to act.

‘We need to get the economy moving again. The government should put the minimum wage up to £10 and give all public servants a proper pay rise.’

The jobs numbers are a rare glimmer of good news for the PM  just when her Brexit plan lies in tatters and her party engulfed in turmoil. 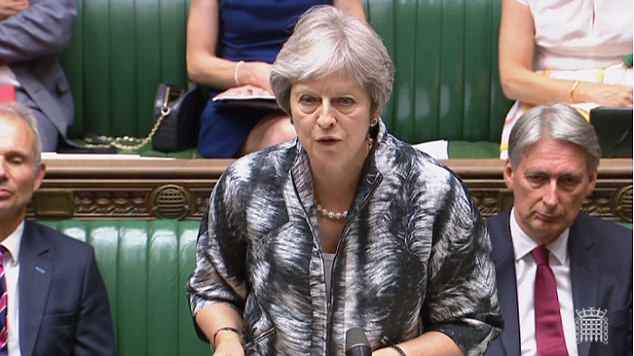 Last night she embarked on a humiliating climbdown by accepting a change to her Brexit blueprint from hardcore Brexiteers which many believe essentially kills of her Chequers plan.

And she suffered another major blow when Tory Remainer Guto Bebb dramatically quit his ministerial post so that he could vote against the Eurosceptic amendments the PM had accepted at the eleventh hour.

While she faces a fresh Commons revolt today – this time by mutinous Remainer MPs furious that she accepted the Brexiteer amendments.

Tory Remainers are backing amendment which says that if the PM has failed to do a deal that keeps a frictionless border with EU by January then they must try to stay in a customs union with Brussels.

Meanwhile, the Tories are set to try to force through a vote to get MPs to break up early for summer in a bid to save Mrs May’s premiership.

As her party is racked by division, fighting and plots to oust her form No10, Mrs May wants them to end the parliamentary term on Thursday – not Tuesday as planned.