End this betrayal of savers: Ministers broke promise to free up annuity cash

Out of pocket: Pauline Smith must wait two years to receive her state pension

Ministers have broken a promise to find a way to help pensioners cash in small annuities, Money Mail can reveal.

Our investigations have uncovered a statement made two years ago by Simon Kirby — then Economic Secretary to the Treasury — in the aftermath of the devastating U-turn that denied five million savers the opportunity to cash in their pensions, in which he said the Government would take action to unlock millions of pounds for older savers.

Had the promise been kept, it would have given an instant — and potentially life-changing — cash boost to tens of thousands of pensioners who collect small incomes of as little as £1 a month from so-called annuities.

Until pension reforms in 2015, five million people were effectively forced to buy these deals to get at the money they had saved up for retirement.

Many would have preferred to receive the full balance in one go — so they could clear debts, carry out urgent home improvements and help struggling relatives — and felt it was unfair that new retirees were allowed to do this while older ones were being denied access.

The Government then announced plans to extend the pension freedoms by allowing those already in retirement to sell their annuities on a new, second-hand market that would be created in 2017.

But in October 2016 — just months before the launch date — Mr Kirby announced a major U- turn and killed off the policy, fearing that customers would get a poor deal.

In response, Money Mail launched its Unlock Our Pensions campaign. We urged the Government and pension companies to work together to let savers cash in pots where it was clearly in their best interests to do so.

Now, it has emerged that MPs from across the political parties lambasted Mr Kirby for the annuity betrayal in a heated debate in the Commons on October 19, 2016 — the day after he announced the U-turn.

The then-minister, who has since lost his seat in Parliament, responded by promising that the Government would ‘be considering . . . all we can do to help’ savers stuck with tiny incomes that are of little use to them.

Stephen McPartland, Tory MP for Stevenage, asked: ‘What will [the minister] and the Treasury be able to do to ensure that pensioners on very low incomes who are trapped in difficult annuities can escape those punishing regimes?’

Mr Kirby replied: ‘The Treasury will be considering this very carefully, but my honourable friend will have to wait until the Autumn Statement to hear how we are best placed to deal with this.’

He was then asked by David Nuttall, then Tory MP for Bury North, whether he would ‘at least look at passing legislation’ to help savers. Mr Kirby replied: ‘That is certainly something we will be looking at.’

In a question to Chancellor Philip Hammond this year, Craig Mackinlay, Tory MP for South Thanet, asked if anything had been done about this.

John Glen, the current Economic Secretary, replied: ‘There are no plans to review the decision not to continue with proposals for a secondary market in annuities at this time.’

Today, Money Mail calls on readers to write to the Chancellor demanding that he takes action.

This could have a major impact, as most major insurers have refused to act until they are given instructions by the Government and the City regulator.

‘I can’t even afford to buy groceries’:Victims of the Government’s betray speak out

Pauline Smith hates asking for help, especially when it comes to money.

But recently she has reluctantly accepted her sister’s offer to buy groceries to see her through the week.

Pauline, 64, has tried unsuccessfully to find work since being made redundant from her receptionist job four years ago.

Like millions of women of her generation, she must wait another two years to receive her state pension.

So when Pauline, from Denmead, Hampshire, heard about government plans to allow savers turn their annuities into a cash lump sum, it was a ray of hope. 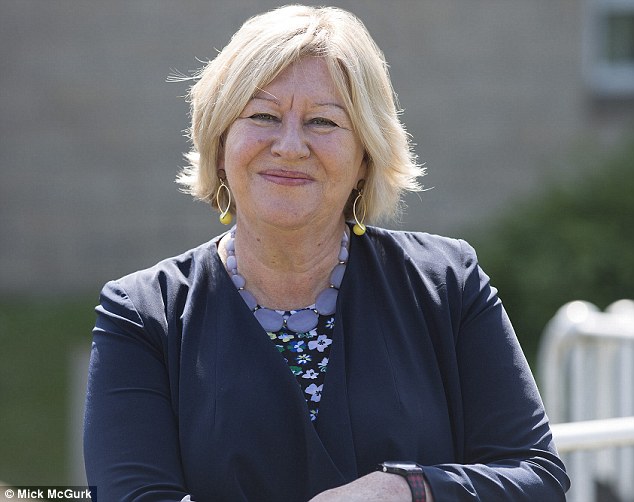 Lorna Binnie, 61, from Falkirk in Scotland, had hoped that cashing in her annuity would pay off her mortgage. But she is caught out by the hike in the state pension age

She hoped to turn the £47 a month she receives from insurer Canada Life into a few thousand pounds.

But in October 2016, just months before the plans were due to come into force, the Government performed a U-turn. It cancelled the new laws and left five million savers, including Pauline, with no alternative way of accessing savings.

Pauline, who is single, finds her £480 a month budget is often stretched by unexpected costs.

She has had to dip into her overdraft or use her credit card a number of times.

Pauline says: ‘When I heard that the Government was going to U-turn on the rules, I was devastated. At times I can’t even afford to buy groceries or a round of coffees when I’m meeting friends.’

Struggles such as Pauline’s are exactly why Money Mail launched its Unlock Our Pensions campaign a year and a half ago.

We are calling on insurers and the Government to let savers access cash locked in annuities. We have received letters from hundreds of people whose lives would be transformed if they were allowed to reverse these deals, which were sold as lifelong contracts.

They were the main way savers accessed retirement pots until the pension freedom laws in 2015 allowed unlimited withdrawals.

But many are receiving payouts of just a few pounds a month and are being forced to continue work in unsuitable jobs.

One woman, from Tetbury in Gloucestershire, who is a customer of giant insurer Royal London, wrote: ‘I’m a low-paid, self-employed cleaner.

‘As I approach my mid-60s I find it hard to do the manual work and get so very tired.

‘I’ve written to Royal London four times asking for my pension. They reply that they know what’s best for me and that’s receiving £65 a month.’ 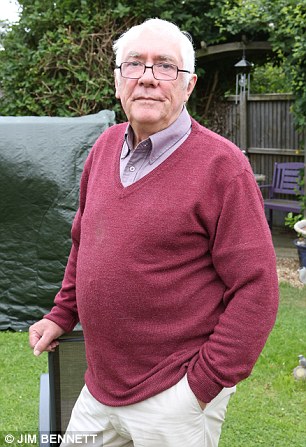 So far, only insurer Phoenix Life has responded to Money Mail’s campaign by offering savers the chance to cash in their annuities. We revealed last year that it is allowing 20,000 people with small annuities to choose a lump sum instead of incomes worth up to £300 a year.

Other pension firms have investigated letting savers cash in, but failed to act.

Privately, most say they will only follow Phoenix’s lead if they receive clear guidance from the City watchdog. They fear they could be accused of ripping off their customers by offering lump sums to the wrong people at the wrong prices.

Industry insiders say the Financial Conduct Authority has written most of the rules — but canned them in 2016 when the Government performed a U-turn on its so-called secondary annuity market.

Now, insiders say the FCA will put these guidelines in place only at the Government’s request. As Money Mail reveals today, ministers have broken a promise to take action.

That stand-off between the authorities has left savers in limbo. Some have been being forced to give up work to care for sick or elderly family members.

Jan Neal cares for her husband, Keith, 74, who suffers from the degenerative condition Huntington’s disease.

Lifting and dressing him at their home in Hinkley, Leicestershire, is hard work — especially now Jan is in her 60s. Keith, is wheelchair bound and cannot speak, and Jan’s wish is for one last holiday.

But money has just been too tight since she gave up her health and safety adviser job to be a full-time carer.

The couple survive on the state pension and two small annuities paying just over £80 a month. Their annuities are with Legal and General, which last year saw profits jump to £2.1 billion from £1.2 billion on the back of increased annuity sales. But it has stated it will not allow customers to cash in annuities.

For Keith and Jan this decision has far- reaching consequences: the couple invested their £50,000 life savings in the plans and get back just £41 a month each.

Jan says: ‘To be able to get the money now would be life-changing — I just can’t understand why Legal and General won’t give it to us when it is money we put away throughout our lifetimes.’

Martin Owens hopes to cash in his annuity and use the £3,000 left in his fund to buy a motorised wheelchair.

Mr Owens, 63, from Clitheroe in Lancashire, was involved in an accident 30 years ago that left him unable to walk.

Since then he has relied on wife Lisa, 63, to push his wheelchair.

Mr Owens, a retired sales manager, had hoped to cash in his annuity with Aviva, but despite asking the firm repeatedly, he has been turned down. ‘Being able to buy a motorised wheelchair would be life-changing for me. It would mean more freedom for me and Lisa,’ he says.

Other readers say their annuity cash would help their children buy a home or pay university fees, which have risen to £9,000 a year.

Josephine Purdie, 74, from Baldock in Hertfordshire, gets just under £1,000 a year from insurer ReAssure. The ex-council worker wants to contribute towards fees her student daughter pays.

She says: ‘I would dearly love to be able to help out my daughter. University fees are so expensive these days. I don’t know how much I would receive for my annuity if I cashed it in. But I do know that I would get more for it than the current £83 a month.’

Peter Vickery-Jones, 76, fears his partner Yvonne, 65, will be forced to foot soaring funeral costs when he dies. He receives just £47 a year from insurer Prudential for a pension he took out around four years ago. Prudential has refused to give him the cash.

Peter, a former engineer from Herne Bay in Kent, says: ‘My annuity would probably only give me a few hundred pounds but it’s my money and it would help me feel I am less likely to be a burden on my family when I die.’

Lorna Binnie, 61, from Falkirk in Scotland, had hoped that cashing in her annuity would pay off her mortgage.

Divorcee Lorna, who recently retired from the Department for Work and Pensions, receives £5,500 a year from insurer Liverpool Victoria. She is caught out by the hike in the state pension age, and has another five years to wait.

She says: ‘It seems as though the Government doesn’t care at all about women. We are often left with less in retirement because we give up work to care for children and family members.’

A spokesman for the Association of British Insurers trade body says: ‘We agreed with the Government that the secondary annuity market reforms came with considerable risks for customers, including from unregulated buyers. We worked constructively with the Government to try to solve these issues, but ultimately consumer protection had to be the priority.’

Send This Letter To The Chancellor

I am one of five million people who feel utterly betrayed by your Government’s decision in 2016 to shelve plans to let savers cash in their annuities.

Like many others, I would benefit far more from having a lump sum than the monthly income I currently receive from my annuity. The cash would make a noticeable difference to my quality of life.

Having read in the Daily Mail that one of your ministers, Simon Kirby, indicated in 2016 that the Government would look at legislation to help those disadvantaged by your decision, I want to know what you intend to do.

I regard your lack of action on this matter deeply troubling in light of those statements and I fully support Money Mail’s Unlock Our Pensions campaign to find a way to help pensioners like me.

Your Government has given anyone who is yet to buy an annuity the total freedom to spend all their pension once they reach 55. All the rest of us want is access to the same rights.

Please respond outlining your plans to correct this rank injustice.