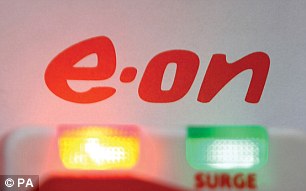 Chief executive Michael Lewis said axing around 5 per cent of its 9,400 UK staff was part of a plan to save around £100million.

UK energy firms are facing a price cap on energy bills as well as a growing number of smaller rivals, with around 60 companies in the market.

Lewis said: ‘We’ve undertaken a rigorous review of our options to ensure we keep costs as low as possible, become a more agile organisation and remain a sustainable business in the UK.’

He said they hoped to avoid compulsory redundancies where possible.

German EON currently supplies around 4.6m customers in the UK.

However, it is set to get a much bigger slice of the market as it is buying German rival Innogy whose UK subsidiary Npower supplies around 4.6m UK homes.

Npower is, meanwhile, forming a new listed company with SSE, which has 7.7m customers.