Ruthless energy firms have been criticised for using excessive numbers of court orders to forcibly install prepayment meters in the homes of customers struggling to pay bills.

Industry regulator Ofgem is concerned companies such as British Gas are rushing to use warrants to insist families in debt have meters put in.

At the same time these customers are being hit with costs of the legal action – which allows energy staff to force their way into a home – and installation, which can be as much as £900.

British Gas installed almost half of these – 41,614 – which was a 26 per cent increase on the year before. Smaller firms – Ovo Energy and Utility Warehouse – were also criticised for over-use of the courts and warrants. 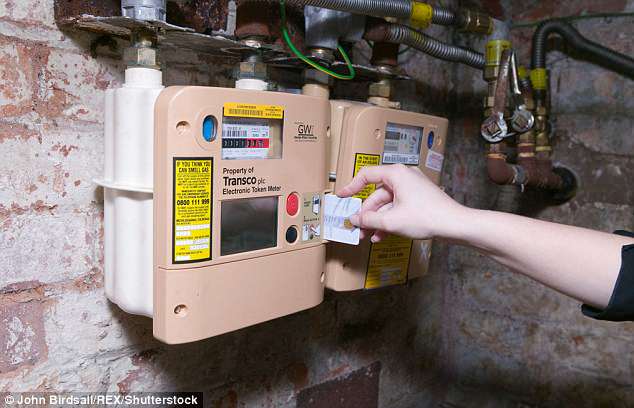 The meters being installed require customers to repay their debt over time through buying credits for gas and electricity. They also ensure people pay for energy before they use it.

Ofgem says energy firms should identify people struggling with bills early and devise repayment plans, rather than using heavy-handed tactics that can leave customers who are already in debt with huge extra charges. It said suppliers must only install prepayment meters by force to recover debt as a ‘last resort’, and its figures make clear some suppliers are using such tactics too often.

The regulator said: ‘Three suppliers forcibly installed a much higher proportion of meters per head for their newly indebted customers than the industry average.’

It said Utility Warehouse used the tactic five times more than the industry average, British Gas did it twice as much, and Ovo Energy used the warrants a third more than average. Ofgem added: ‘Whilst Utility Warehouse and Ovo Energy have improved their performance since 2016, installing fewer meters under warrant, their use is still high.’ Earlier this year, Ofgem banned forcible installations for the most vulnerable and capped charges at £150 – they had previously ranged from £400 to £900.

Rob Salter-Church, from Ofgem, said: ‘We expect all suppliers to reach out to these customers and respond to their needs, not exacerbate their difficulties.’

British Gas said it has cut the number of court cases designed to force customers to have meters since last year, adding: ‘Warrants are only ever issued as a last resort.’ Ovo Energy said it had changed its policy last August and installed fewer than ten prepayment meters under warrant since then.

Utility Warehouse did not respond to requests for a comment.