Stock markets in London and across Europe slumped into the red today after Turkey landed the latest blow in the global trade war by slapping tariffs on US imports.

Weak commodity prices also hit mining shares which make up a significant proportion of the FTSE 100 index and other leading European indices.

The Paris and Frankfurt markets were also off by 1.8 per cent and 1.6 per cent respectively, and the leading Wall Street indices have fallen by 1.1-1.4 per cent in early trading. 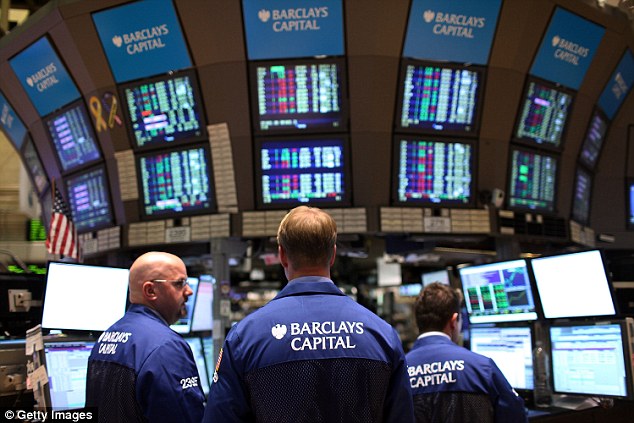 Word trade war fears and concerns over China’s economy hit shares on wall Street (pictured) as well as in London and across Europe.

David Madden at CMC Markets said dealers are worried about the currency crisis in Turkey, and the cooling of Chinese growth.

‘European banks have lost ground today as investors are concerned the financial problems in Turkey could spread to the eurozone,’ he added.

‘Natural resource stocks like BHP Billiton, Rio Tinto, Randgold Resources and Glencore are all lower on the session as metals are under severe pressure.

‘Copper, Platinum and Palladium are weaker as traders are concerned the Chinese economy is cooling, and yesterday’s disappointing fixed asset investment and industrial production reports from Beijing confirmed their fears.’

The latest fall for London’s blue-chip index will put a small dent in workers’ pension pots and investment Isas, and continues a rollercoaster year for the stock market.

Motoring-related stocks across Europe were among the worst performers, pushing Germany’s DAX down to a six-week low after Turkey doubled tariffs on US alcohol, car and tobacco imports.

The auto sector was down 1.7 per cent, near lows hit when trade war fears gripped markets at the start of July.

‘The imposition of punitive tariffs on a raft of US imports is hardly indicative of the Turkish authorities being ready to embark on some sensible monetary and fiscal measures to combat the crisis,’ said Neil Wilson of markets.com.

Miners were down 3.3 per cent and at an eight-month low as renewed anxiety over trade piled pressure on a sector already dented by falling copper prices.

In the UK, Admiral rose to the top of the FTSE 100 risers’ list, gaining 3.6 per cent, after posting a 9 per cent rise in first-half pre-tax profit.

Hikma Pharma posted the best performance by mid-sized listed firms, up 7.5 per cent, after raising its outlook.