The ex-boss of Stobart Group has been accused of splurging up to £5million of company cash on private jets and sponsoring horse racing events.

Andrew Tinkler put air travel provided by other companies he owned on company expenses, and his daughter lived rent-free at the firm’s flat in London’s Soho, court documents reveal.

Details of the ‘unnecessary and excessive’ spending have emerged in papers as part of an explosive long-running dispute between Tinkler and the company he helped grow. 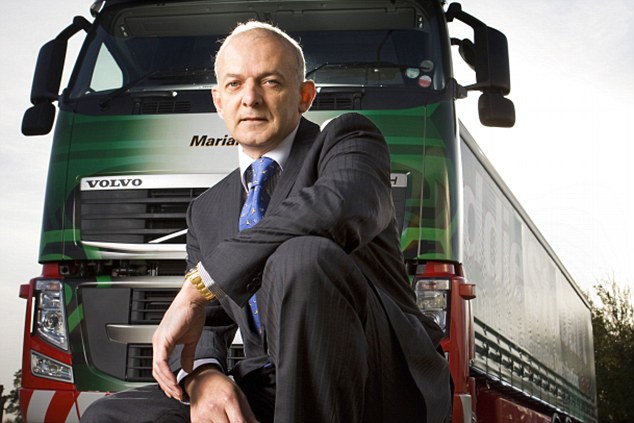 Expensive tastes: Ex Stobart boss Andrew Tinkler has been accused of splurging up to £5m of company cash on private jets and sponsoring horse-racing events

They also claim that star fund manager Neil Woodford and Edinburgh Woollen Mill owner Philip Day plotted with Tinkler to make millions of pounds from a takeover of Flybe.

Tinkler ran Stobart Group, which owns Southend and Carlisle Lake District airports, and supplies biomass, for ten years before stepping down last year but remained on the board.

He has since tried to oust the chairman, and the company has accused him of trying to subvert it and fired him from the board.

Stobart Group is suing Tinkler for damages and compensation, claiming he breached his fiduciary duties as a director. He says expenses arrangements were signed off by the audit committee.

In court papers, the company says claims that between March 2015 and February 2018, Tinkler ran up a helicopter bill of £1million, paid to Apollo Air Services, a company he owns.

Tinkler is also said to have charged jet transport of £594,000 to WA Developments International, again a company he owns.

It is claimed that under his watch Stobart Group spent £2.9m on sponsorship and branding, mostly on racecourse events between December 2014 and January 2018. Tinkler is a racing fan who owns several horses.

The firm also claims that in February 2015, Tinkler bid at a Cancer Research UK auction for a £50,000 Range Rover, and billed the company for it.

It says that while the vehicle was put in Stobart Group’s car pool, it was only used by his daughter, Laura, who was on the staff until February 2016.

And it says she was also allowed to live rent-free in a flat leased by Stobart Group in Soho Square, London, one of the capital’s priciest locations.

Other expenses include £51,399 for a horsebox, which was repaid, and £132,500 to companies run by ex-Boyzone singer Ronan Keating.

The two payments are significant because in July this year Keating tweeted his support for Tinkler during the row with the board, branding the company’s treatment of him disgraceful.

The company also says that last November, Tinkler, Woodford and Day plotted to buy 60 per cent of Stobart Group’s airline business for £20million as part of a potential takeover of Flybe in a move that would have seen them sell that interest three months later for £40million.

It says the proposal would have benefited Tinkler and other consortium members but was not in the interests of the group or other shareholders, a claim that is denied by Tinkler.

He says he was ousted and the board has tried to discredit him, leaking derogatory information to the press, and that complaints around expenses have been raised in a bid to support his ‘unjustified’ firing.

He notes the company does not allege the expenses were personal expenses, does not claim they were unauthorised, and says the arrangements were signed off by the audit committee.

Tinkler says the car and the flat used by his daughter were also used by other staff.